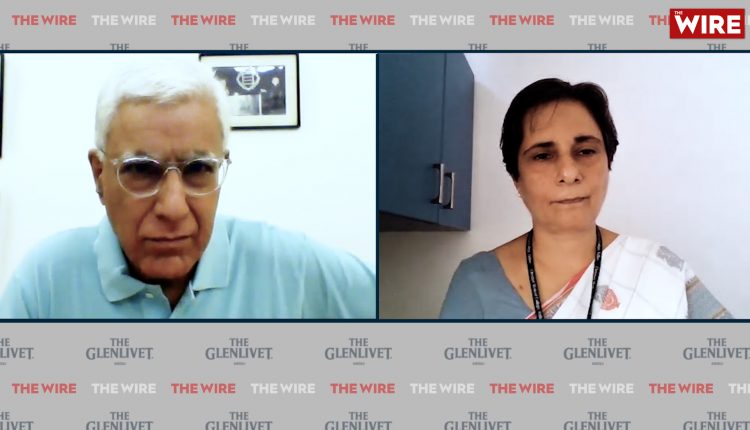 Professor Gagandeep Kang, one of India’s most highly regarded professors of virology and a member of the Covid Working Group has given a strong and forceful endorsement to Kerala’s handling of COVID-19 whilst pointing out that the rising daily case count is “a very small part of the overall picture”.

She said: “Kerala has done an outstanding job in controlling the spread of COVID-19 so far” and “Kerala is not a concern for the rest of India … there’s not a lot to worry about (Kerala).” In fact, Kang pointedly added that Kerala “could act as a model for the rest of India”

In a 23-minute interview to Karan Thapar for The Wire, professor Kang said the “best explanation” for the fact that a state with 2-3% of the country’s population is presently accounting for just over 50% of the daily increase in cases nationwide lies in the fact Kerala’s sero-positivity, as established by the fourth nationwide sero-survey, is substantially less than the national average. Kerala’s figure is 43%. The national figure is 68%. This means that Kerala has done an excellent job protecting its people from infection which is why the sero-positivity is so low. It also means that well over 50% of the Kerala population – a much higher percentage than any other state – remains vulnerable and susceptible to the virus.

Kang also points to two other critical facts about Kerala which are not understood or appreciated nationwide. First, Kerala does an average of 140,000 tests a day. On July 28, Kerala did 196,000 tests. In comparison, West Bengal, with a population three times larger, does an average of 50,000 daily tests. But that’s not all. In addition to doing more tests than most other states, Kerala is also testing in a far smarter way. The tests are targeted at areas where positivity is believed to be high. Therefore, they lead to a larger number of positive outcomes. The combination of more testing than most states and better targeted testing i.e. smarter testing, also explains the present high incidence of positive cases, she said.

In The Wire interview, professor Kang also drew attention to two other facts about the vaccination and health care response to COVID-19 in Kerala that are not understood and appreciated outside the state. First, Kerala has fully vaccinated just over 20% of its population, compared to a national figure of 7.5%. The percentage of people in Kerala with a single jab is 38% compared to 25% nationally. This means not only has Kerala done an excellent job protecting its people from the virus, as shown by the low sero-positivity of the state, but also it’s doing a better job than most states providing protection through vaccination.

In the interview, Kang also pointed out that Kerala’s case fatality rate of 0.5% is almost one-third of the national case fatality rate of 1.3%. Consequently, though cases may be increasing at over 20,000 a day, occupancy of hospital beds, ICUs and ventilators is less than 50%. Kerala’s healthcare system is in control of the situation and it’s not under pressure.

However, she pointed out that Kerala does need to take steps to bring down the R0 number [the number of people a person with COVID-19 can infect], which has reached 1.2. She spoke of the need to impose restrictions on travel and movement and other non-pharmaceuticals interventions. She even seemed to agree that local lockdowns in areas with high levels of infection might be necessary.

Gagandeep Kang was also critical of Kerala’s decision to lift COVID-19 restrictions for three days over Eid and the earlier decision to permit large political rallies during the recent state election campaign.

The above is a paraphrased precis of Gagandeep Kang’s interview to Karan Thapar for The Wire. Although recounted from memory, it is not inaccurate. There is, of course, a lot more in the interview than has been covered by this precis. Please see the full interview for a better understanding and appreciation of professor Gagandeep Kang’s viewpoint.

The post Watch | Kerala’s COVID Situation Not a Concern for the Rest of India: Kang appeared first on The Wire Science.

‘We will do this again’: Watchdog warns US learned no lesson from Afghan war as govt swept failures under the rug

Aniston trying to set up Paltrow with Bloom?