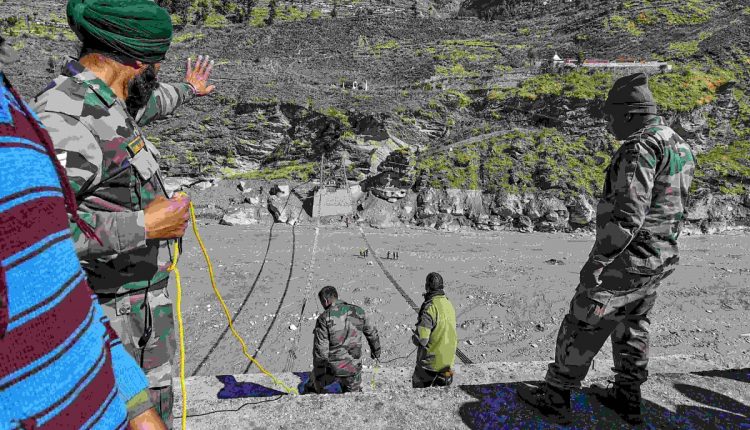 Police personnel on a search and rescue operation near the damaged Tapovan hydel project tunnel after the flood in early February 2021, Uttarakhand. Photo: PT

The Rishiganga river that flows near Raini village in Uttarakhand is no more the meek river it once was. The remains of damaged hydropower structures and the dead that remain buried in its vicinity, never to be found, bear witness to the flooded river that gushed through the valley and ravaged the area on February 7 this year.

At least 204 people had died in the flood, and two hydropower projects – 13.2 MW Rishiganga near Raini, and 520 MW Tapovan Vishnugad near Tapovan village – were completely damaged. The economic losses from damages to the projects alone exceed Rs 1,625 crore. On July 24, Saturday night, parts of the Tapovan Vishnugad project’s tunnel near Selang village, along with a lot of equipment, were damaged in a landslide. The evaluation of losses from the recent damages was pending at the time of filing the report.

Parts of the Tapovan Vishunagad project’s tunnel were damaged in a landslide on July 24. Photo: Special arrangement.

Six months after the flood, three people from Raini and two from Joshimath – in Chamoli district – approached the Uttarakhand high court seeking revocation of the projects’ forest and environmental clearances, and eventual cancellation of the two hydropower projects.

In their public interest litigation (PIL), the petitioners claimed that the use of explosives during project construction had weakened the already fragile hills, thereby increasing the frequency and intensity of landslips in the region. The current situation is such that for safety, the villagers from Raini sometimes take shelter in nearby forests. Considering this, the need for rehabilitation of the villagers was raised in the PIL.

The petition also sought to fix accountability of the hydropower companies for “criminal negligence”, since, of the 204 deaths, 192 happened at the hydropower sites. In the absence of any early warning system, the hydropower workers had no information about the incoming flood.

Also read: Why We Already Know the Rishi Ganga Flood Was a ‘Sooner or Later’ Event

However, in a major setback to the petitioners, on July 14 – the first day of the hearing – the division bench of Chief Justice Raghvendra Singh Chauhan and Justice Alok Kumar Verma gave its judgment, calling the petition “highly motivated”, and the five petitioners “puppets at the hand of an unknown puppeteer”.

In the four-page judgment, the division bench stated that that though the petitioners “claim” to be social activists, there is no proof to ascertain the authenticity of the claim. “…there is no piece of evidence produced by these petitioners to establish the fact that they are “social activists”. They have neither mentioned if they had spearhead(ed) a social movement, or raised any social issue on any previous occasion…”

2021 Uttarakhand HC Judgment by The Wire

In sum, “not convinced with the bona fide of this petition”, the division bench dismissed the petition, while also imposing a fine of Rs 10,000 each on the five petitioners.

All three petitioners from Raini belong to a Scheduled Tribe community. Petitioner Sangram Singh (44) was the block development council (BDC) member between 2014 and 2019. He had approached the Uttarakhand high court in April 2019 too, seeking the court’s intervention to stop the Rishiganga project developers from using explosives, dumping muck into the river, and engaging in illegal mining.

2019 Uttarakhand HC Order by The Wire

When the use of explosives continued against the high court order, Singh approached the National Green Tribunal (NGT). “The NGT formed a team to investigate the matter, but it comprised people from the district administration whose intentions we were unsure of,” he says. Ultimately, all the efforts proved futile, and the project was built, says Singh.

On June 9, this year, the same division bench had heard another hydropower project-related matter – NTPC’s 171 MW Lata Tapovan – where too Singh is a petitioner. He says that the project’s tunnel passes through his hamlet, due to which the land there is sinking.

“On June 9, my identity was not a problem, but on July 14, my credibility and identity became questionable. How is that possible?” he asks.

The other petitioner, Bhawan Singh (34), is Raini’s current gram pradhan. The third petitioner from the village Sohan Singh (38) is a farmer and the grandson of Chipko Movement’s leader, Gaura Devi.

The remaining two petitioners – Atul Sati (47) and Kamal Raturi (49) – are residents of Chamoli’s Joshimath town. Sati is a CPI (M-L) leader, and Raturi is a Congress leader. Since 2004, under the banner of ‘Joshimath Bachao Sangharsh Samiti’, they both have been actively raising concerns related to the environment, public safety, and issues of compensation and rehabilitation in projects like the damaged Tapovan Vishnugad.

Of the two projects in question, NTPC’s Tapovan Vishnugad project was under construction when the February disaster hit, and 139 people who died in the flood were workers at the project site. NTPC’s counsel Kartikey Hari Gupta says, “The petition has no concrete evidence on NTPC violating any existing norms…It (NTPC) is committed towards sustainable development. ”

In the year 2013, massive floods ravaged Uttarakhand. Over 4,000 people died in the Kedarnath Valley alone. After which, the Supreme Court directed the Union environment ministry to form an Expert Body to assess whether the devastation from floods had worsened due to the presence of hydropower projects. In the year 2014, the Expert Body, which was headed by the Dehradun-based environmentalist Ravi Chopra, submitted a report supported by strong evidence of the distressing impact of hydropower projects in the state.

Also read: Two Months After Floods, Chamoli in the Grip of Fear, Trauma and Sleeplessness

Speaking to The Wire, Chopra, who has been engaged with issues of hydropower for over 15 years, says, “With all due respect to the court, this judgment is deeply disappointing. The constitution demands a duty from all Indian citizens to ensure the well-being of the environment. A judgment like this will dishearten the common citizens from fulfilling this constitutional duty.”

Mallika Bhanot, who is a member of Ganga Ahvaan – a forum working towards conservation of the river Ganga – and has been active in the issues of hydropower projects in Uttarakhand since 2007, says, “The judgment is appalling. People died in the disaster. The PIL raised a pertinent issue which warranted thorough scrutiny of the petition based on its merits, and not solely on the identity of the petitioners, who, by the way, are all authentic.”

The judgment might act as a deterrent for people bearing the brunt of hydropower projects from approaching courts in the future, says Bhanot.

Hemant Dhyani, an environmentalist associated with Ganga Ahvaan, who was a member of the Expert Body that Chopra headed, says that the petition is “not based on whims and fancies. It is supported by several scientific reports, legal evidence, and evidence of the ground situation.”

The petitioners’ counsel Joshi says that during the hearing he had requested the division bench for another date of hearing where the petitioners could be present to prove their credibility as social activists. However, the request was turned down.

Additionally, the financial requirements of the case have been heavily weighing down upon the petitioners. Atul Sati says, “We want justice, but we have limited financial resources.”

The villagers themselves contributed the money for the petition that was filed in the high court in Nainital, over 290 km from Raini. Due to limited funds, counsel Joshi was paid no fee. Joshi says that barring his fee, of the Rs 25,000 that he spent on the petition, only an amount of Rs 7,000 has been received from the petitioners.

A Special Leave Petition (SLP) requesting a stay on the high court’s judgment was filed in the Supreme Court on July 27, Tuesday.

Sati says, “Our only remaining hope is the Supreme Court, so we decided to take our case there. In the SLP, we have requested a stay on the Uttarakhand high court judgment. Our other prayers remain the same as they were in the petition we had filed in the high court.”

Kavita Upadhyay is a journalist and researcher from Uttarakhand, who writes on the environmental issues in the Indian Himalayan Region. She’s a graduate in Water Science, Policy and Management from the University of Oxford.

I’m more than my accomplishments and gymnastics: Biles