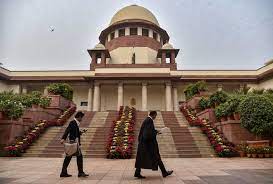 Questioning the legality of the setting up of Sachar committee by the Manmohan Singh-led UPA government in 2005, a PIL in the Supreme Court on Thursday sought a direction to restrain the Centre from acting upon its recommendation for running or initiating any schemes in favour of the Muslim community.

The committee, headed by former Chief Justice of Delhi HC Justice Rajinder Sachar, was set up in March 2005 to prepare a report on the social, economic and educational condition of the Muslim community. It submitted its report to the Centre in November 2006. Justice Sachar died in 2018.

Filed by Uttar Pradesh residents Neeraj Shankar Saxena, Manish Sharma, Umesh Rawat, Arun Kumar Singh and Shishupal Bhagel, the PIL alleged that the March 9, 2005, notification issued by the office of the PM constituting the committee “nowhere mentions that the same was being issued after any cabinet decision”. Petitioners’ counsel Vishnu Shankar Jain said the committee’s appointment was “unconstitutional and illegal” as it was made in violation of Article 77 of the Constitution.

Holder can be ‘awesome leader’ for Windies: Lara