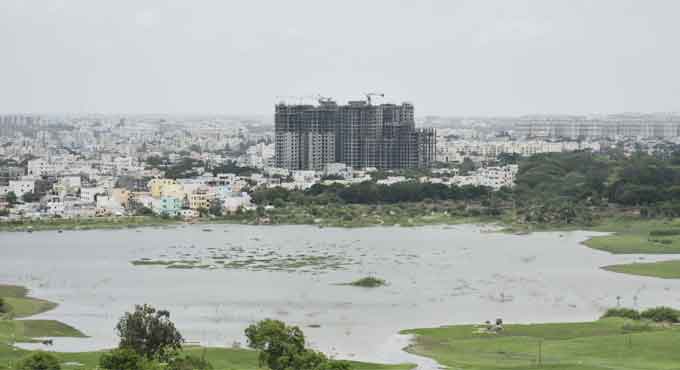 Hyderabad: In a major step towards conservation and rejuvenation of lakes, the State government has taken up the exercise of mapping the boundaries of water bodies and notifying them.

To restore the urban lakes that got polluted over the decades due to rampant urbanisation and apathy, the State government has taken up restoration activities under Mission Kakatiya in a phased manner. Under the programme, 19 lakes have been shortlisted. Works are already underway at these water bodies with a capital outlay of Rs 279.78 crore.

With Full Tank Level (FTL) demarcation of all 185 lakes in the Greater Hyderabad Municipal Corporation (GHMC) jurisdiction completed, the boundary maps of tanks are being submitted to Hyderabad Metropolitan Development Authority (HMDA) for preliminary as well as final notification.

As on date, FTL boundary maps of 100 tanks have been preliminarily notified and final notification of 50 tanks has been completed. All these maps are to be uploaded and put in public domain.

As a part of preliminary notification, the survey numbers are marked, boundaries are fixed and time is granted to people for claims and objections.

“Once the process of final notification is completed, there is no chance for claims and objections, the boundaries are fixed and the maps are uploaded in HMDA website,” said an official from irrigation department deputed to GHMC.

Civic works to protect the water bodies, beautification works and removal of water hyacinth are some of the works that are underway. The GHMC has already sanctioned Rs 94.17 crore to develop 63 lakes. Fencing around the lake boundary, illumination, developing greenery, walking tracks, entrance plazas, and children play area are some of the works taken up with the funds.

“Diversion of sewage from entering the lakes is given utmost priority. Restoration of lake appurtenant structures and works pertaining to regulation of inflows and outflow channels are being taken up,” said a GHMC official.

NZ’s IPL-based Test players to leave for UK on May 11:…

‘Angry Birds Movie’ sequel turning out to be…