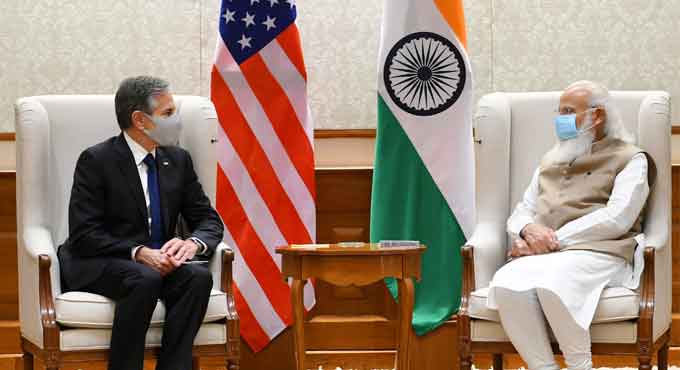 New Delhi: The US on Wednesday said that there can be no military solution to the Afghan conflict and India has and will continue to make vital contributions to Afghanistan’s stability and development as a leader and a critical American partner in the region.

The clear assertion was made by visiting US Secretary of State Antony Blinken at a joint press conference with his Indian counterpart S Jaishankar after the two sides held extensive discussions on the evolving situation in Afghanistan and other issues.

Blinken, the third senior member of the Biden administration to visit India this year, arrived in the national capital on Tuesday evening in the midst of a deteriorating security scenario in Afghanistan following the withdrawal of American troops.

The US Secretary of State said that ultimately it has to be an Afghan-led and Afghan-owned peace process in Afghanistan, a position that has been pushed by India consistently for the last several years.

“India and the US share a strong interest in a peaceful secure and stable Afghanistan. As a leader and as a critical partner in the region, India has made and will continue to make vital contributions to Afghanistan’s stability and development and we will continue to work together to sustain the gains of the Afghan people and support regional stability after the withdrawal of coalition forces from the country,” Blinken said.

He said both India and the US agreed strongly that any future government in Afghanistan has to be inclusive and fully representative of the Afghan people.

“Taking over the country by force and abusing the rights of the people is not the path to achieve those objectives. There is only one path and that is to come to the negotiating table and resolve the conflict peacefully,” Blinken said, referring to the Taliban’s attempt to seize control of new areas by resorting to violence.

He said both India and the US are committed to the proposition that there is no military solution to the conflict in Afghanistan.

“We largely see Afghanistan the same way. Both are committed to the proposition that there is no military solution to the conflict in Afghanistan,” he said, with Jaishankar by his side.
Blinken said the US remained “very much” engaged in Afghanistan in support of the government through various ways including to the security forces as well as exploring to find ways through diplomacy.

“We are engaged in Afghanistan. We are trying to bring the parties in a meaningful way to resolve the conflict peacefully,” he said.

Blinken also warned that Afghanistan may become a “pariah state” if Taliban militants forcefully take over the country and curtail the rights of its own people including women. Jaishankar said it is essential that peace negotiations are taken seriously by all parties.

“The world wishes to see an independent, sovereign, democratic and stable Afghanistan at peace with itself and with its neighbours but its independence and sovereignty will only be ensured if it is free from malign influences,” he said.

Afghanistan has been witnessing a series of terror attacks since the US began withdrawing its troops on May 1. The US has already pulled back the majority of its forces and is looking to complete the drawdown by August 31, ending nearly two-decade of its military presence in the country.

As the situation deteriorated in Afghanistan in the last few weeks, India has been in touch with leading international players as well as the Afghan government on the overall developments in the country.

India has been a major stakeholder in the peace and stability of Afghanistan. It has already invested nearly USD three billion in aid and reconstruction activities in the country. India has been supporting a national peace and reconciliation process which is Afghan-led, Afghan-owned and Afghan-controlled.

The post Role of India vital in Afghanistan: US State Secretary appeared first on Telangana Today.