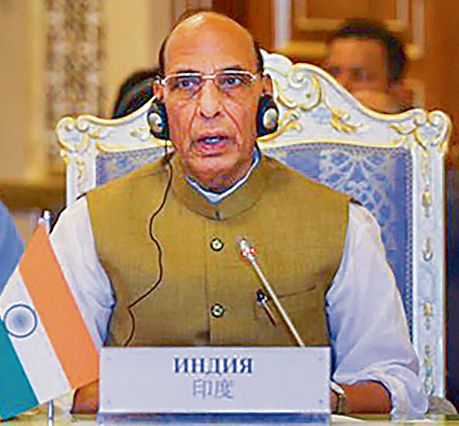 In an indirect reference to China at the Shanghai Cooperation Organisation (SCO) Defence Ministers’ meeting in Dushanbe, India on Wednesday said all nations must respect international laws.

Defence Minister Rajnath Singh said India had been regularly participating in SCO activities, including in defence cooperation programme, reflecting the nation’s commitment to work closely within the SCO framework.

Though Rajnath didn’t point out any dispute, his reference was towards China’s insistence on not agreeing to the UNndash;mandated decision on territorial limits of the South China Sea and also the ongoing boundary dispute with India. He listed New Delhi’s idea saying “legitimate interests of partner countries must be recognised and common good upheld to build a durable framework of regional collaboration”.

Rajnath also hit out at Pakistan, though he didn’t name the western neighbour. “Peace and prosperity cannot coexist with terrorism. Terrorism is the most serious threat to international peace and security. Any act of terror and support to such acts, including cross-border terrorism, committed by whomsoever, wherever and for whatever motive, is a crime against humanity,” he said.

During the Covid pandemic, he said, India had been at the forefront of providing support to countries around the world.

NBA star arrested in LA on suspicion of selling marijuana