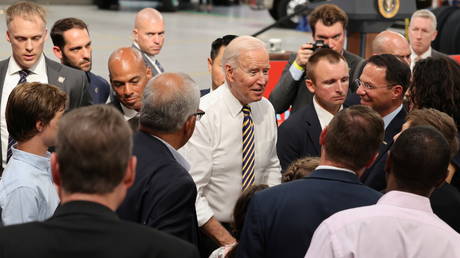 US President Joe Biden put on a mask to meet with Belarus opposition figure Svetlana Tikhanovskaya at the White House, but took it off on a trip to Pennsylvania, where he mingled with a crowd to promote his economic plan.

A photo posted on the official presidential Twitter account on Wednesday shows Biden standing close to Tikhanovskaya, and says they met at the White House.

The US “stands with the people of Belarus in their quest for democracy and universal human rights,” Biden declared, in keeping with Washington’s recognition of Tikhanovskaya’s claim that the country’s 2020 presidential election was fraudulent.

I was honored to meet with @Tsihanouskaya at the White House this morning. The United States stands with the people of Belarus in their quest for democracy and universal human rights. pic.twitter.com/SdR6w4IBNZ

Several hours after his meeting with the aspiring leader of Belarus, however, there was hardly a mask in sight at Biden’s event outside Allentown, Pennsylvania. The president visited the area to tour a truck factory and give a speech about his ‘buy American’ economic program.

Photos from after the speech show him maskless, walking among a small crowd of unmasked people, and even hugging some of them.

Pres. Biden in Allentown, Pennsylvania, after remarks on manufacturing … pic.twitter.com/94yv6a2vt7

Biden also refused to answer questions about the rumored vaccine mandates for federal employees, already in effect for medical staff at the Department of Veterans Affairs.

“I’m talking about Made in America today, that’s all I’m going to talk about,” Biden said after exiting Air Force One and hearing a shouted question about a vaccine mandate for the military. “Tomorrow I’ll talk about whatever you want to talk about, including Covid.”

While the White House continues to insist that the vaccines are safe and effective and everyone should take them, the government has been masking up again and telling Americans to do the same, citing a rise in Covid-19 cases attributed to the so-called Delta variant of the virus.

Department of Homeland Security orders all employees to mask up and distance, regardless of vaccination status

On Tuesday, the CDC altered its advisory, telling some fully vaccinated Americans to mask up again in certain circumstances. Vice President Kamala Harris and her staff quickly covered up at an event in Washington, DC while Speaker Nancy Pelosi (D-California) reimposed masking orders in the House of Representatives.

The CDC recommendation applies to “public indoor settings” in “areas with substantial and high transmission” of the virus. According to the CDC’s own data, Lehigh County is currently considered “moderate,” while Biden travelled from the District of Columbia, designated “substantial.”

Biden, who is 78 and considered in a high risk category for Covid-19, is fully vaccinated. He has insisted on masking up – at one point, wearing two masks – in the past, only to switch gears in May as part of a vaccination push.

‘Nobody Says No To India’: Aus’ Usman Khawaja Slams Teams For Choosing Safety Over…

Black foods are the new super-food

Muslims should bow to ‘Indian culture’; Ram, Krishna, Shiva were their ancestors: UP minister