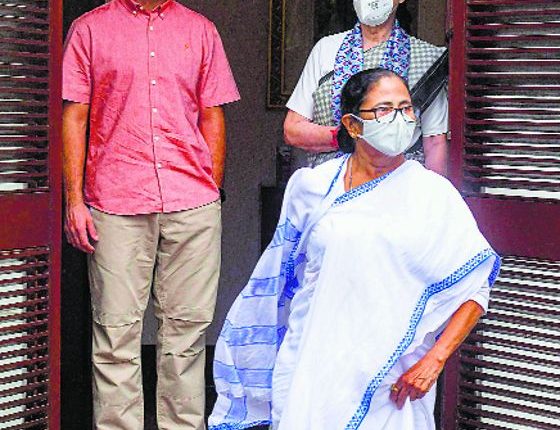 Setting up of a united front to challenge the Narendra Modi-led BJP in the 2024 Lok Sabha General Elections was discussed at a meeting Congress chief Sonia Gandhi and her son Rahul Gandhi held with West Bengal Chief Minister Mamata Banerjee at Sonia’s residence here on Wednesday.

Emerging from the meeting, Mamata told reporters, “Sonia ji invited me to have a cup of tea with her. Rahul ji was also there. We discussed the political situation, Pegasus issue and Covid. Unity of the Opposition also came up for discussion.”

“It was a positive meeting. I think the result will show in the next election,” Mamata said. It is necessary that everyone joins hands to ensure the defeat of the BJP,” she said. On the contentious issue of leadership of the proposed front, Mamata said, “I am only a cadre and am street smart.”

No issue if someone else leads front

It will depend on the situation as to who becomes the face of the Opposition to take on BJP. But I have no problem if someone else leads the front. —Mamata Banerjee, West Bengal CM

Shortly before her meeting with Sonia, the Bengal CM told reporters that the leader of the proposed front would emerge in the course of struggle against the Modi-led regime.

This is her first visit to Delhi after the crushing defeat inflicted by her on the BJP in West Bengal in the recently held Assembly elections there. The feat has helped her gain recognition in political circles as someone who can take on Modi.

Mamata said the meeting of various Opposition parties proposed by her during an online address from Kolkata would not take place because it would amount to violation of the Covid guidelines.