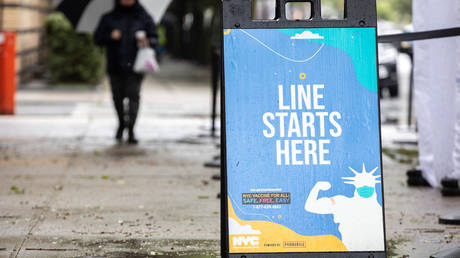 New York’s mayor has opted to put away the stick and reveal a stash of new carrots — $100 prepaid debit cards for those who get the Covid-19 jab – despite a slew of previous incentives somehow failing to grab their attention.

“We wanted to supercharge it by saying we’ll give you extra, direct personal incentive to get this done now,” Mayor Bill de Blasio told the city on Wednesday, making it clear that New York’s future was one in which “more and more things are going to be determined by whether you’re vaccinated or not.”

Some 54.4% of New Yorkers have been fully vaccinated as of Wednesday; that number jumps for fully-vaccinated adults to 65.5%. The offers represent those who get the jab at city-run sites.

This is after the city and various corporate partners have offered free MetroCards, free Junior’s cheesecake, Krispy Kreme donuts, and Nathan’s hot dogs (forget about that obesity comorbidity), free lottery tickets and free Uber and Lyft rides to vaccination sites, museum tickets, and scholarships. Free marijuana was even provided, technically illegally, by an activist group, thanks to Cuomo dragging his feet on appointing the necessary supervisory board after legalizing sale of the drug in March. The city even offered free vaccinations to tourists in what turned out to be a woefully premature anticipation of the city “opening up” for tourism once again.

Many were skeptical that the payment — a pittance in a city where the average rent approaches a whopping $4,000 per month — would get people to the needle who hadn’t already had their shots, while others wondered the reverse — what would stop people from wandering in for repeat shots every time they needed cash?

If the government offered you $100 to take any other medication, wouldn’t that raise eyebrows for you @ScottAdamsSays

Pay people $1000 to get vaccinated and you will see a huge spike in vaccinations.

I’m waiting for $1,000 minimum. Might help offset my living expense increase caused by the @federalreserve… for a couple weeks

With comparatively few New Yorkers hospitalized across the city since the height of the deadly pandemic, many in the city have begun thinking the pandemic is over, one which even universal mandatory masking hasn’t completely been able to shake — and which slipped even further during the few mask-free weeks the city has recently enjoyed.

However, some including conservative Dilbert cartoonist Sam Adams pointed out that de Blasio was using an “effective persuasion technique” — incentivizing people to do something, especially with money, is often a surefire win, especially with those who are desperate or thinking in the short-term — like cash-strapped New Yorkers.

This is effective persuasion technique. Won’t convince most people, but you can get some people to do almost anything for $100. Especially if the offer might later go away. https://t.co/8OYap3ZFkb

De Blasio made the announcement just days after warning city employees that they must vaccinate by September or be tested weekly, implying they could face the loss of their job otherwise — and many were no doubt still emotionally reeling at having such a dictat dropped in their lap. New York Governor Andrew Cuomo issued a similar announcement that day, reminding state workers that they have until Labor Day to get vaccinated and that any unionized workers who experience negative side effects from the vaccine will be permitted to take as many paid days’ off as needed to recover.