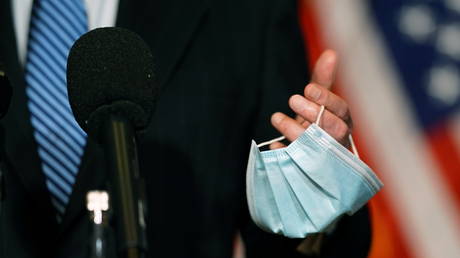 The attending physician at the US Capitol has reimposed a mask mandate for Congress just weeks after lifting it, triggering backlash in the GOP amid reports the doctor pulled down his mask at a briefing on his own rule.

The masking recommendation was taken up in the House on Wednesday, after Dr. Brian Monahan issued the guidance the night prior, requiring indoor face coverings for members of Congress as well as anyone in the House’s office buildings, hall or committee meeting chambers, including the fully vaccinated.

“For the Congress, representing a collection of individuals travelling weekly from various risk areas (both high and low rates of disease transmission), all individuals should wear a well-fitted, medical-grade filtration mask… when they are in an interior space,” he wrote.

To be clear, for meetings in an enclosed US House of Representatives controlled space, masks are REQUIRED.

MASK MANDATE: Capitol’s attending physician reinstates mask mandate inside Capitol complex on the House side due to COVID-19 surge pic.twitter.com/dCxFyZFAfd

The mandate lays out exemptions for “when an individual is alone,” addressing lawmakers or seeking recognition to do so, and, as with the previous rule, failure to comply could result in fines. The Senate has not yet adopted the same measure.

While the masking rule was lifted for the fully vaccinated in mid-June on Monahan’s recommendation, he warned lawmakers last week that several vaccinated representatives had tested positive for the coronavirus, noting the fast spread of the more contagious Delta variant. He said House members might consider masking up at the time, but stopped short of urging for a new mandate.

Monahan’s memo also came on the heels of a new guidance from the Centers for Disease Control and Prevention (CDC) on Tuesday, which recommended universal indoor masking in “areas with substantial and high transmission.” The health agency gave the new advice less than 24 hours after assuring vaccinated Americans they could resume life as normal.

The CDC’s revised mask advice and the new rule at the Capitol have both stoked outrage among Republicans and conservative critics, who cried hypocrisy after a photo emerged showing Monahan at a briefing with GOP reps without a face covering. In the image, shared by Federalist co-founder Sean Davis, Monahan is seen with his mask pulled around his chin. It remained that way for “at least 45 minutes,” a source present for the briefing claimed.

A source who was in the room during the briefing said Monahan’s mask was off for at least 45 minutes and possibly up to an hour, so it wasn’t an issue of Monahan removing the mask for a brief instant and then putting it back on. https://t.co/3DMDO0enTE

“Reckless. He’s going to cause a superspreader event in the House. It will be the biggest attack on American democracy since the Civil War.” -probably Democrats and their corrupt corporate media cronies if this was one of their political opponents https://t.co/kqC4WUpwmc

House Minority Leader Kevin McCarthy (R-California) offered scathing criticism of the masking requirement, arguing it is not supported by science while accusing House Speaker Nancy Pelosi of flouting a rule she vocally supports.

“Twice today I saw the speaker in a crowded room without a mask, less than 24 hours after imposing the mask mandate,” he said, later adding. “This is no different than [Pelosi] telling people they couldn’t go out while she’s getting her hair done.”

Speaker Pelosi wants you to do as she says, not as she does. She and President Biden are doing everything possible to keep you living in fear with your mask, even if you’ve been vaccinated.

McCarthy also took aim at the CDC’s ever-shifting advice, saying “First they tell us ‘Don’t wear a mask, wear a mask, wear two masks,’ then to take the masks off.” McCarthy argued that the US Capitol building itself is not a “hot spot” and therefore should be exempt from the rule.

“The vaccination rate for members of Congress is over 85%, and as of today, the transmission rate on the Capitol campus is less than 1%. The facts would tell us this isn’t a hot spot, so the CDC recommendation doesn’t apply to us,” he said.

The CDC, however, does classify the nation’s capital as an area of “substantial” transmission of Covid-19 – defined as any county with 50 to 100 cases per 100,000 residents in a seven-day period – meaning it would fall under the new guideline.

Other Republicans also tore into the new mandate, including Reps. Lauren Boebert (Colorado), Jim Jordan (Ohio) and Marjorie Taylor Greene (Georgia), while Dan Crenshaw of Texas claimed it was based on faulty science in a lengthy Twitter thread.

More mask mandate drama at the House of Representatives:

GOP Rep. Lauren Boebert threw a mask back at a House floor staffer when she was offered one while trying to walk onto the floor maskless, according to a witness account relayed to CNN.

“If you are fully vaccinated, you no longer need to wear a mask.”

He also said that his guidance is based on two studies from the CDC that he hasn’t even read & they arent published yet.

Dan Crenshaw let him know one is a study from India that had been rejected in peer review.

The Capitol’s face mask rule was brought back to life as President Joe Biden considers whether to impose a vaccine requirement for all federal employees, with the Departments of Veterans Affairs and Homeland Security already moving ahead with similar policies. Though the White House advised federal agencies not to make vaccinations mandatory just last month, it appears to have adopted a new stance in the weeks since, in line with the CDC’s own reconsidered mask recommendation.

Will never bow down before outsiders: TMC MP Abhishek…

Older adults who can distinctively smell roses, lemons may…