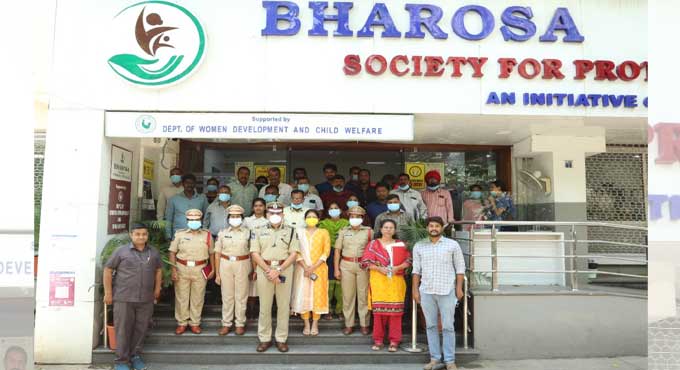 Hyderabad: The Bharosa Centre will be a one-stop support centre for women and child who were victims of all forms of crimes, Home Minister Mohammed Mahmood Ali said on Wednesday. He was speaking at the foundation stone laying ceremony of the Bharosa Centre at Bhagath Singh Nagar in Saroornagar under the Rachakonda Police Commissionerate limits. The building will be built with a budget of Rs 1.75 crore over 5,500 sq ft area and will be completed in a year.

“Chief Minister K Chandrashekhar Rao has been giving top priority to the safety of women in the State and established 33 She Teams that have been working round the clock,” Mahmood Ali said, adding that of the surveillance cameras in the country, 64 per cent are from Hyderabad, Cyberabad and Rachakonda police limits, which help solve cases within hours.

Director General of Police M Mahender Reddy elaborated the significance of CCTV cameras in crime detection and solving. “A total of 8.5 lakh community CCTV cameras have been arranged across the State in association with residents and politicians,” he said.

Rachakonda Police Commissioner Mahesh Bhagwat said as part of the Safe City Project, 30 Centres for Development and Empowerment were proposed in Hyderabad, out of which seven would be in Rachakonda apart from one Bharosa Centre for each Commissionerate. The centres would help the police in making available counseling services pertaining to domestic violence closer to the communities that these centres serve.

“These will have full time counselors as well as other support staff and they will act as a hub to the Bharosa Centre concerned and further strengthen uniform service delivery for victims of domestic violence,” Bhagwat said.

40 Indians abducted in violence-hit Iraq, no information on…