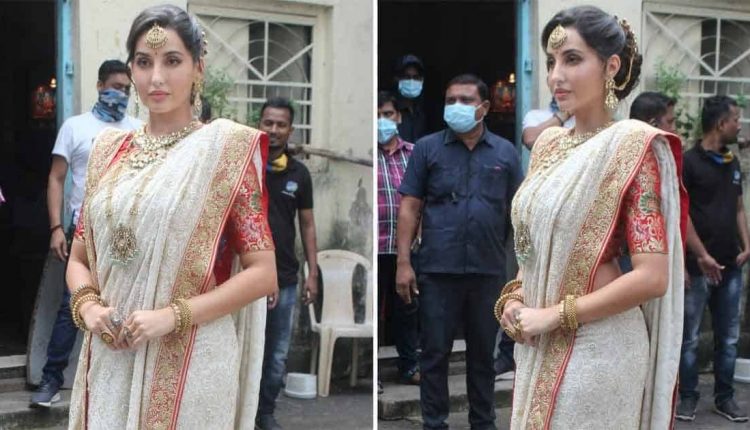 Putting on her Bollywood swag, Nora Fatehi dressed up as Madhuri Dixit Nene recreating her ‘Dola Re Dola’ look in order to celebrate 100 years of Bollywood on a dance reality show as a judge. Earlier Nora has expressed her desire to star in the senior actress’ biopic and her latest pictures prove she’s ready for it!

In her YouTube vlog, Nora Fatehi had shared her overwhelming experience of meeting Madhuri Dixit Nene for the first time while co-judging a dance reality show along with the senior actress. Expressing her fondness for Madhuri, Nora has often regarded the former as her idol. Concluding the vlog, Nora Fatehi termed herself as a hopeless dreamer for wanting to star in Madhuri Dixit’s biopic.

Requesting her fans to share their thoughts, Nora Fatehi said, “Guys, comment if you want me to do Madhuri ma’am’s biopic in future. I’m just a hopeless dreamer, I swear!”

As the dance reality show celebrates 100 Years of Bollywood, Nora Fatehi decided to declare her admiration for Madhuri yet again by dressing up in the latter’s iconic ‘Dola Re Dola’ look from Devdas.

Earlier, Madhuri Dixit Nene has showered Nora Fatehi with praises, appreciating the young actress for her talent, dedication and passion towards her art.

Nora has carved her path to success in Bollywood, terming Madhuri as her inspiration. Today, Nora Fatehi is one of the most loved and popular performers in not just India but across the world with a global print of record-breaking streak of success.

Currently gearing up for the release of her upcoming next ‘Bhuj: The Pride of India’, Nora has generated a huge chatter across quarters to witness her never-seen-before avatar in the film.

Offering the testimony of devotion to character and commitment to craft, Nora Fatehi displays sheer professionalism by sporting a real injury on her Face in the first look of her upcoming film.

The motion poster for one of the most anticipated films of the year ‘Bhuj: The Pride of India’ released revealing the looks of the ensemble cast including Nora Fatehi. While the different looks set the tone for the period drama, Nora Fatehi’s look as Heena Rehman specifically stands out as the actress sported real blood on her forehead for her character.

The post Nora Fatehi Pays An Ode To Her Idol Madhuri Dixit Nene By Recreating Dola Re Dola Look appeared first on Koimoi.

Jugal Hansraj Reveals Replacing Saif Ali Khan In A Film Days Before The Shoot Began: “I Was Shocked”