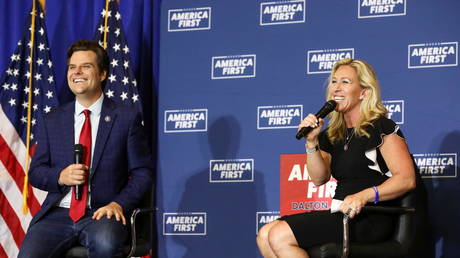 A press conference with Republican House members, including Reps. Matt Gaetz (R-Florida) and Marjorie Taylor Greene (R-Georgia), was dramatically cut short as protesters drowned them out and chased them down the street.

Protesters gathered behind the Republicans holding the Tuesday presser about the January 6 Capitol riot and immediately began the disruptions with whistles being blown and one demonstrator walking around with a mockup of Donald Trump on a stick.

At one point, Greene directly addressed the protesters and promised Republicans “will not back down.”

“We will not back down. We will not stop asking questions” Marjorie Taylor Greene speaks on the January 6th defendants outside the Department of Justice. Much of the speech is drowned out by protester whistles in the crowd #DC pic.twitter.com/sXLfJtaxK0

“We will not back down, we will not stop asking questions, we are looking for the truth. And we believe the truth can be found by reaching out and answering and asking the right questions to the right people,” she said.

The presser ended once protesters got too close to the Republicans and essentially took over the event. Gaetz and Taylor Greene were followed by protesters, even seemingly getting confused about where they were walking as they were swarmed. One woman immediately grabbed attention on social media for running after the Florida congressman repeatedly asking: “Are you a pedophile?”

The comment was in reference to a federal investigation into allegations that Gaetz paid a 17-year-old girl for sex and to travel across state lines to meet him, which he denies.

The whistler is entirely drowning out the GOP members. pic.twitter.com/kgTO5xnwJL

Reps. Gaetz and Greene get run out of their own presser at the DOJ. pic.twitter.com/Jc3BTbUO05

While conservatives pundits were quick to blast the unproductive disruption by protesters, more liberal critics took to social media to celebrate the “heroes” who caused the scene.

That woman yelling at Gaetz, “are you a pedophile” is my hero of the internet today. Thank you!!! 🥇

What if veep is real? https://t.co/tP8yOjS8pi

Criticism of Gaetz was further fueled on Tuesday after his future sister-in-law posted TikTok videos blasting him. Gaetz is engaged to the TikToker’s sister, Ginger Luckey.

In her videos, Roxanne Luckey, 20, called Gaetz “weird and creepy” and claimed he tried pressuring a relationship between her and an older man, according to the Daily Beast. She said she was “not surprised” by the accusations against him. She has since made her TikTok account private.

Held outside the Department of Justice, the event was meant to highlight the alleged mistreatment of those who have been arrested in connection with the January 6 Capitol riot.

Rep. Paul Gosar (R-Arizona), who also took part, described the rioters arrested as “nonviolent prisoners” and claimed he has heard reports that they have faced mistreatment in jail, including allegedly being kept in solitary confinement for nearly 24 hours.

“These are not unruly or dangerous, violent criminals, these are political prisoners who are now being persecuted during the pain of unjust suffering,” he said.

While the press conference was held, a committee put together in the House began hearing testimony from Capitol officers about their experiences on January 6. Republicans have been highly critical of the committee, claiming it is too biased towards the Left. One of the two Republicans sitting on the committee, Rep. Liz Cheney (R-Wyoming), took time during Tuesday’s proceedings to blast her colleagues over their press conference.

“The fact that so many members of our leadership, and others, the fact that they’ve gone from recognizing what happened on the 6th to protesting in front of the Justice Department on behalf of those who were part of the insurrection is something that I can’t explain,” she said, adding that it’s a “disgrace.”

Republican House leader Kevin McCarthy has dubbed Cheney a “Pelosi Republican” for her involvement in the committee and her continued criticism of her own party.