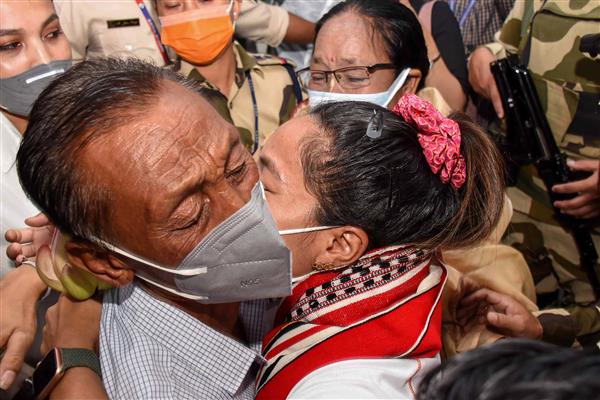 Manipur state gave a grand reception to Saikhom Mirabai Chanu who got silver medal in Tokyo Olympic in 49kg category of women weightlifting when she arrived at Bir Tikendrajit International Airport, Imphal on Tuesday.

Manipur Chief Minister N Biren Singh along with his Cabinet colleagues, MLAs, officials, her family members, friends and supporters received her at the airport.

Mirabai Chanu attended a grand reception function organised by the Directorate of Youth Affairs and Sports, Manipur at City Convention Auditorium just after her arrival at Imphal this afternoon.

CM Biren Singh handed over a cheque of Rs 1 crore and an appointment letter to Mirabai to be the Additional Superintendent of Police (Sports) in the reception function where the Olympian’s parents and family members were present. Two coaches of Mirabai, Anita and Brojen were also honoured at the function.

Mirabai Chanu was escorted by CM and his Cabinet colleagues and Director General of Police up to the newly furnished office of the Additional Superintendent of Police (Sports).

Villagers of Nongpok Kakching which happened to be Mirabai’s birthplace and neighbouring areas located in Lamlai Assembly Constituency also organised a grand reception for her.