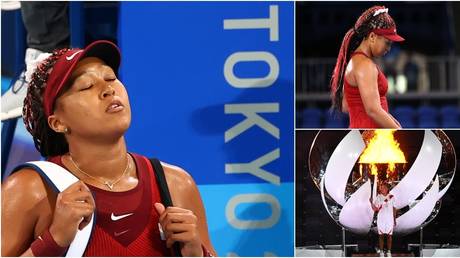 Home favorite Naomi Osaka – who lit the Olympic flame at the opening ceremony – has been knocked out in the third round of the women’s singles event in Tokyo, losing to Marketa Vondrousova of the Czech Republic.

Four-time Grand Slam champion Osaka had returned to much fanfare for the Tokyo Games, having pulled out of the French Open earlier in the year and missing Wimbledon altogether due to mental health issues.

On her return to the limelight she lit the Olympic flame at the opening ceremony in Tokyo and hopes had been high that the Japanese star could win gold in her birthplace.

However, after sailing through the opening two rounds Osaka went down in straight sets to world number 42 Vondrousova on Tuesday, 6-1, 6-4.

Osaka was dejected as she bowed out of her maiden Olympics. © Reuters

A hugely popular star, Osaka had been seen as one of the main faces of these Olympics.

The 23-year-old had spoken of her pride at being handed the honor of lighting the Olympic flame at Friday’s opening ceremony, and on Monday had tweeted: “I’m here for a good time.”

However, Osaka found her gold medal hopes extinguished by the 22-year-old Vondrousova.

The Czech former French Open finalist hit 18 winners and converted five of her 11 break points in the match, while a struggling Osaka produced 32 unforced errors on her way to defeat.

Vondrousova will face either Spain’s Paula Badosa or Nadia Podoroska of Argentina in the last eight in Tokyo.

Following Osaka’s exit, the highest seed left in the tournament is Ukraine’s Elina Svitolina, who is seeded fourth.

WhatsApp will not limit functions for users not accepting…