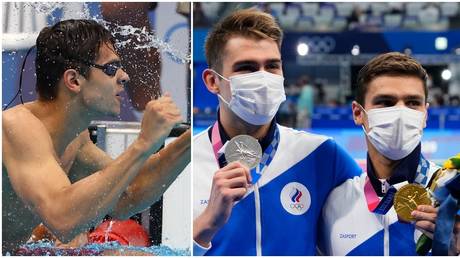 Evgeny Rylov became the first Russian in 25 years to win an Olympic gold medal in the pool as he powered to victory in the 100m backstroke final in Tokyo, edging out countryman Kliment Kolesnikov by just 0.02 seconds.

Rylov set a new European record on his way to winning gold with a time of 51.98 seconds at the Tokyo Aquatics Center, the first time a Russian has won an Olympic swimming event since the 1996 Games in Atlanta.

Teammate Kolesnikov – the world record holder in the 50m backstroke – finished just a fraction behind in a time of 52.00 seconds.

Their pair’s heroics mean Russians occupied the top two positions on an Olympic swimming podium for the first time since the Moscow Games in 1980.

Rylov’s victory is also the first ever for a Russian swimmer in the history of the men’s 100m backstroke at the Olympics.

America’s Ryan Murphy – Olympic champion in this event in Rio de Janeiro five years ago – had to settle for bronze with a time of 52.19 seconds.

Kolesnikov, Rylov and Murphy pose with their medals in Tokyo. © Reuters

Rylov, 24, adds to his impressive medal haul of two world championship titles and four European crowns, having also claimed bronze in the 200m backstroke in Rio in 2016.

Perhaps his only disappointment of the day in Tokyo came when organizers refused to allow him to wear his favorite cat-themed facemask for the medal ceremony, although he had emerged for the race with it on.

“I want to cry. They didn’t let me wear my cat mask. They told me, ‘sorry, it’s not allowed’. But I’m not going to argue with the organizers,” Rylov said of the mask, which had been given to him by his girlfriend.

The silver for  teammate Kolesnikov, 21, is a first medal at Olympic level for the youngster but he has already enjoyed a host of success at world and European level, including six European titles.

The medals added to Russia’s haul at the Tokyo Games, where the team is competing under the banner of the Russian Olympic Committee (ROC) due to WADA sanctions.

The Russian team is fourth in the overall medal table with five gold, seven silver and three bronze medals. The US lead the way, followed by Japan and China.

Zaheer’s journey illustrates strength of his…