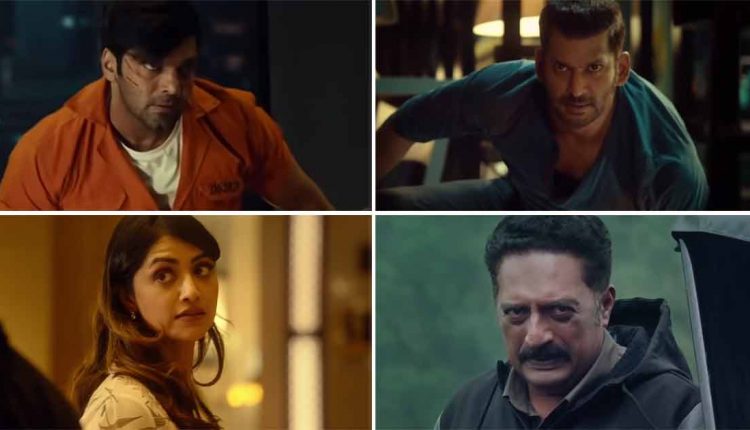 The fans of Vishal and Arya were recently treated with a thunderous teaser of Enemy, which has been received unanimously well on social media. Set in Singapore, the story revolves around the friend-turned-foes; one of the two leads seems to be a cop & another looks like a high-profile prisoner captivated at Changi Prison.

The entire Enemy teaser revolves around this cat & mouse chase between Vishal, Arya set in an enthralling, ‘lit’, VFX-heavy city filled with modern cars and radiant skyscrapers. The first scene, in which Vishal’s character is standing on the edge of a mammoth skyscraper, registers how the scale will be monumental.

Anand Shankar attempting such a high-scale actioner also makes sense because not many remember; he started his career as an Assistant Director to Siddharth Anand in Anjaana Anjaani. Yes, the same director who gave us Hrithik Roshan, Tiger Shroff’s War and is all set to gift a phenomenon of action in Shah Rukh Khan, John Abraham, Deepika Padukone‘s Pathan.

The teaser gains its pumped-up aura also because of Sam CS’ thumping background score. He’s the same person behind the soundtracks of Kaithi & Vikram Vedha. Hence, there’s no doubt why the BGM of this one won’t stir your body with bass while watching it on a sound system. R. D. Rajasekhar’s camerawork swiftly moves from one sequence to another, creating an impeccable montage of slickly-shot scenes.

Makers of Enemy released its much-awaited teaser video over the weekend and, within a few days, has crossed 15 million views! The movie starring dynamic duo Vishal and Arya have been garnering a positive response on social media.

Slated to release in September this year, Arya & Vishal’s Enemy teaser promises the viewers an entertainment package filled with action, stunt sequences, romance, and an ensemble of actors. The teaser is already going viral across short format apps, and WhatsApp statuses as viewers anticipate the release of the music. The song of the teaser is expected to release soon.

Must Read: Mukesh Khanna Reacts To Raj Kundra P*rn Scandal: “Shilpa Shetty Would Know About This 120%”

This Chic Summer Bag Is Made With Recycled Fabric, and Yep, We’re Obsessed

Light rain in Delhi-NCR, no relief from air pollution