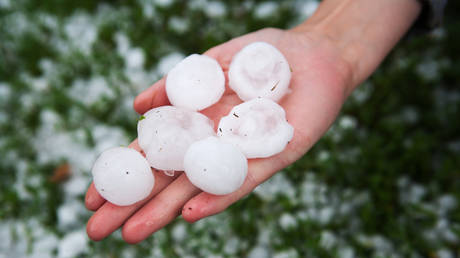 Hundreds of cars piled up on a major Italian highway on Monday after being damaged by a massive hailstorm which left several people injured, brought down trees, and caused damage in several regions.

Videos online show hail, which reached the size of a tennis ball, bombarding the ground amid strong winds and rain in a truly frightening sight.

Hundreds of cars were stuck in a traffic jam on the A1 highway not far from the city of Parma in northern Italy. Numerous windshields were smashed by the hail, forcing drivers to stop as they couldn’t see the road.
Several collisions were reported, while some people were lightly injured by broken glass. Traffic on the highway was halted for several hours due to the weather.

Hail storm damaged many cars today in Italy on A1 highway near #Parma https://t.co/JmDIHTdDwu pic.twitter.com/19r3YMlhKV

A 78-year-old store owner was wounded in Reggio Emilia’s commune of Luzzara after the freak weather caused the window of his shop to fall on him. The man was hospitalized with a fracture.

Three people were also injured in Modena, with two of them hurt after their van was hit by one of the many falling trees.

The hailstorm not only battered people’s homes and property, but also devastated fields, vineyards, and orchards in the area, with the damage to agriculture estimated in the millions.

But while northern Italy is being hit by hail and storms, the south of the country has been suffering from a lack of rain for around three months now.

Wildfires, which the authorities describe as unprecedented, continue to rage in Sardinia, consuming more than 20,000 hectares of forest and destroying several farms near the town of Montiferro on Monday, forcing the evacuation of around 900 people.

Europe has been hit by extreme weather this summer, with heavy rains causing unprecedented flooding in Germany, Belgium, Austria, and several other countries including Italy earlier this month, leading to at least 217 deaths, most of them in Germany.

Farmer protests: Samyukt Kisan Morcha puts off decision on the fate of agitation…