‘Why do you need to have that information?’ White House REFUSES to reveal number of ‘breakthrough cases’ in Covid-infected staff 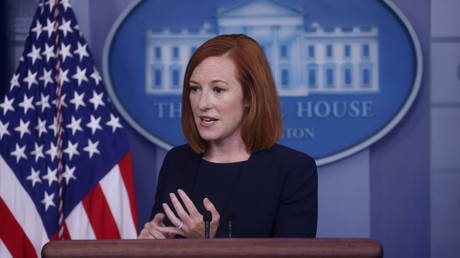 White House Press Secretary Jen Psaki pushed back against calls to reveal the number of administration staff members who have been infected with Covid-19, despite being vaccinated.

During a Friday press conference, Psaki was questioned about the lack of details on the revelation this week that there have been “breakthrough cases” among White House staff members, namely the exact number of cases.

“I think, first, we’re in a very different place than we were six to seven months ago, as it relates to the virus,” Psaki said, adding that despite more and more cases of vaccinated individuals getting infected, vaccination provides more protection from “serious illness” and typical symptoms associated with the coronavirus.

‘Time to start blaming the unvaccinated’: Alabama’s governor splits critics as she loses it over state’s low inoculation rate

Asked if the White House is “hiding something” by not revealing the amount of infections to the public, Psaki asked, “Why do you need to have that information?”

Told it was a case of “transparency,” Psaki simply pointed to general information about “breakthrough cases” and Covid-related deaths and hospitalizations as a resource for more information.

A reporter challenges @PressSec on not releasing the number of breakthrough covid cases among WH staffers:

REPORTER: “Why not just provide the number are you trying to hide something?”@PressSec: “Why do you need to have that information?”

Critics pounced on Psaki’s defense of the lack of information, with many claiming there would be a much different reaction from the press at large if a Donald Trump press secretary like Kayleigh McElany had questioned a reporter’s search for “transparency,” especially related to Covid cases in the White House.

“Shocking that the self-described ‘most transparent administration in history’ even has to ask this dumb question,” Republican strategist Matt Whitlock tweeted.

Life comes at you fast.

The Biden campaign (and media) consistently attacked the Trump admin for not being transparent about staff outbreaks.

Translation: There’s an outbreak of COVID amongst vaccinated White House personnel and no one must know. https://t.co/0mDFQU2CAP

The accidental red-pilling by these horrible people continues at a record pace… https://t.co/e9YF4bYC1J

Psaki revealed earlier this week that there have been positive Covid-19 cases in the White House that have not been disclosed.

Psaki mainly focused on pushing vaccinations to the unvaccinated during Friday’s press conference, similar to other recent talks with the press. The press secretary claimed unvaccinated Americans pose a threat to those who are vaccinated, despite them being protected from the virus, as she said when addressing the “transparency” question.

Despite the efforts of Psaki and the rest of Joe Biden’s administration, the number of vaccinations given continues to fall, and interest in getting vaccinated remains significantly low for those who have avoided inoculation thus far.

A poll released by The Associated Press on Friday showed that the majority of unvaccinated respondents had little to no interest in changing their status, with 45% saying they have no plans to get vaccinated, and another 35% saying they will likely not be getting vaccinated in the future.