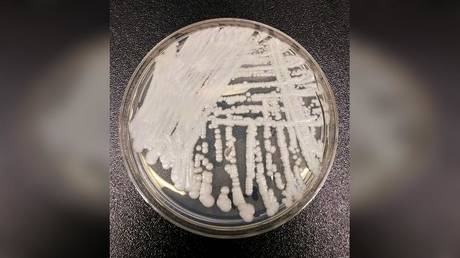 Though the country and wider world may be preoccupied with Covid-19, the US Centers for Disease Control and Prevention has warned of a highly transmissible and drug-resistant new strain of fungus spreading in American hospitals.

Candida auris may not be the household name that Covid-19 is, but that doesn’t mean scientists aren’t concerned about it. In a report released on Friday, the CDC noted that clusters of Candida auris cases have been reported in hospitals in Texas and Washington, DC since January, originating in healthcare facilities.

Candida auris is a fungus that spreads easily and can cause dangerous infections. New evidence is emerging that cases of C. auris resistant to all classes of antifungal drugs are spreading in health care settings. Read the report: https://t.co/olhWJZM4r5. #Cauris pic.twitter.com/1MgMSLsKyc

The fungus is highly transmissible, and “leads to invasive infections, including bloodstream infections” in 5%-to-10% of patients it colonizes. There was a 30% mortality rate in both the Texas and DC outbreaks, but as they occurred in hospitals, it is unclear what role the fungus played in these deaths.

The CDC is concerned by the fact that both outbreaks occurred independently of each other. Its report concluded with a warning to physicians and hospital staff that “surveillance, public health reporting, and infection control measures are critical to containing further spread.”

Before Covid-19 stole the attention of scientists and healthcare professionals last year, antibiotic-resistant infections were considered one of the gravest threats to the public. In late 2019, the CDC sounded the alarm about the rise in such infections, warning that drug-resistant ‘superbugs’ were infecting three million Americans annually and killing four people every hour.

Additionally, the World Health Organisation warned last December that the overuse of antibiotics during the coronavirus pandemic was creating a strain of antibiotic-resistant “super gonorrhea.”