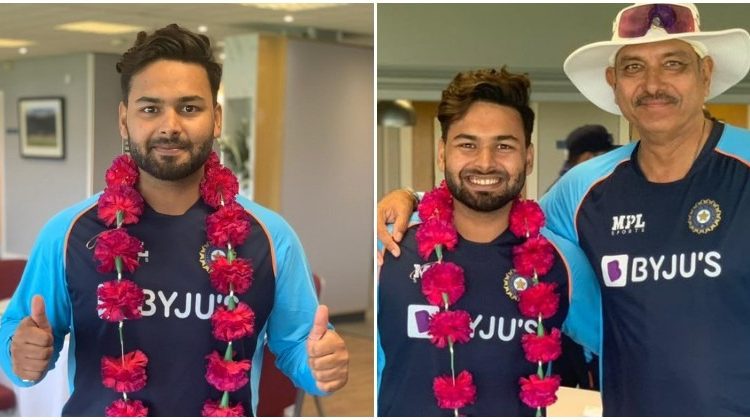 Rishabh Pant has finally recovered from the COVID-19 virus and has returned to unite with his team in Durham to resume practice ahead of the five-match Test series against the hosting England side and he was welcomed with open arms by the team head coach, Ravi Shastri.

After being confirmed to have contracted the coronavirus during the 20-day break Indian cricketers were given after the World Test Championship final, Pant was in isolation as the rest of the squad played their first practice match against the County Select XI.

On Thursday evening, when the wicket-keeper batsman finally united with the rest of the squad, he was clicked with a garland of red flowers around his neck as coach Shastri stood next to him with a sense of pride and joy in his eyes.

After paraphrasing an iconic Shahrukh Khan dialogue in Hindi, Pant wrote: “Thrilled to be back. Thank you @RaviShastriOfc for this grand welcome,” from his official Twitter handle.

However, pictures that he posted online quickly became a source to a series of memes coming his way. While fans were happy to see the young southpaw back on his feet and ready to swing for the fences, they weren’t going to miss out on the opportunity to get in a few jokes as well:

After getting passing marks in maths pic.twitter.com/lnXkpaMxU6

@DineshKarthik
Is he look like Goat with that flowers on neck..

Jokes apart..
Congratulations
All the best

#Rishabhpant
Me Won an Argument With teacher !
My Friends – https://t.co/WKWwKuK0Cr

It was being reported that the wicket-keeper batsman may have contracted the virus while attending the EURO 2020 match between England and Germany at the Wembley Stadium on June 30. Images of him getting pictures clicked in the middle of thousands of fans without even wearing a mask, went viral since that day and fans had warmed the southpaw about the importance of wearing a mask.

Eventually, sources close to the cricketer also revealed that Pant had gone to a dentist for a couple of days during his break time and this may also be the venue where he got in touch with the virus.

The practice match between India and the Country Select XI ended in a draw with Rohit Sharma’s side declaring 192 runs to lead by 283 runs in the second innings and their opponents only being able to score 31 before the third and final day was over.

Those in habit of looting money now afraid of…