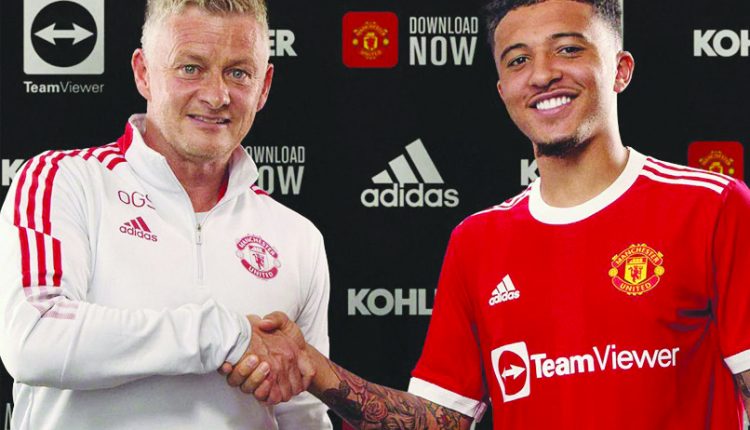 Manchester, July 23: England winger Jadon Sancho finalized his move to Manchester United by signing a five-year contract with the 13-time Premier League champions on Friday.
United paid Borussia Dortmund a transfer fee of 85 million euros ($100 million) for the 21-year-old Sancho, the German club said. The contract will keep Sancho at Old Trafford until June 2026 and includes an option for a sixth season.
The agreement had been disclosed while Sancho was on international duty with England at the European Championship. Sancho played four seasons with Dortmund after starting his career at Manchester City.
“The chance to join Manchester United is a dream come true and I just cannot wait to perform in the Premier Leagu,” he said in United’s statement.
Sancho compiled 49 goals and 63 assists across all competitions for Dortmund, according to the Bundesliga club, which wished him well.
“It was Jadon’s express desire to return to his home country and the Premier League, and his behavior was absolutely flawless at all times,” Dortmund chief executive Hans-Joachim Watzke said in a statement.
United finished second in the Premier League last season, 12 points behind rival Manchester City. “This is a young and exciting squad and I know, together, we can develop into something special to bring the success that the fans deserve,” Sancho said.
United manager Ole Gunnar Solskjaer said Sancho “epitomises the type of player” he wants at Old Trafford.
“He is a forward player in the best traditions of Manchester United. He will form an integral part of my squad for years to come and we look forward to seeing him blossom,” Solskjaer said.
“His goals and assists records speak for themselves and he will also bring tremendous pace, flair and creativity to the team.”
In 2017, Sancho turned down a deal to stay at City and instead went to Dortmund.
Now he will play with the other Manchester team, which is looking to dethrone its neighbor. United kicks off its new season on August 14 against Leeds. (AP)