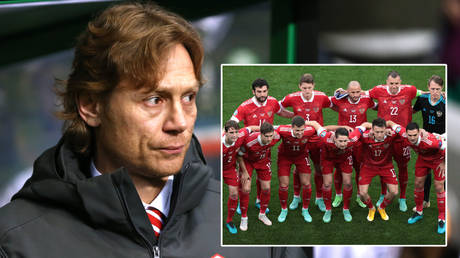 Valeri Karpin has been appointed as Stanislav Cherchesov’s successor as manager of Russia, with the 52-year-old set to sign a contract until the end of 2021 and combine the role with his existing job as Rostov coach.

Terms of Karpin’s appointment have been agreed, with him set to officially ink a deal on Monday which will initially run until the end of 2021, including an option to extend the terms of the agreement beyond that date if all parties agree.

The head coach of the Russian Premier League side, who won 72 caps for Russia between 1992 and 2003, will take over after Chercheshov left his role shortly after Russia’s poor showing in this summer’s European Championships.

The initial terms of the deal will see Karpin take charge of both the Russian national side and Rostov, who he has led since 2017.

“Valeri Karpin needs no introduction to football experts and fans. He was one of the best Russian players of his generation, playing well both for clubs and for the Russian national team,” said President of the Russian Football Union (RFU) Alexander Dyukov, via translation.

“The national team is a new challenge for him. We saw, on his part, the desire and readiness to accept this challenge.”

Karpin’s playing career saw him represent a number of clubs including CSKA Moscow and Spartak Moscow, as well an 11-year stint in Spain that saw him play for Real Sociedad twice, Valencia and Celta Vigo.

He also brings major tournament experience to the job, having played for Russia in the 1994 and 2002 World Cups, as well as Euro 96 in England.

“I thank the Russian Football Union for the trust,” said Karpin in his first comments after accepting the job.

“For both the player and the coach, the invitation to the national team is a great honor and high appraisal of his work.

“For me, this is a new, very important and interesting stage in my coaching career. Now, in front of the team the task is to [qualify] for the 2022 World Cup in Qatar. We will make every effort to solve this problem.”

Karpin won’t have long to prepare for his first assignments in the job, with Russia set to face Croatia, Cyprus and Malta across seven days at the start of September as they kick off their 2022 World Cup qualifying campaign.

Heels that can change on wearer’s whim