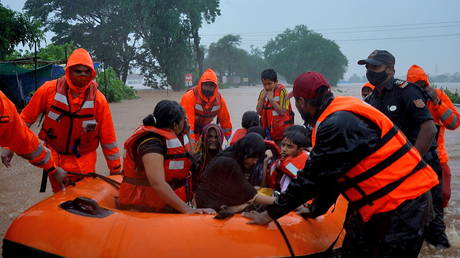 At least 67 people have died as monsoon rainfall sparked floods and landslides, primarily in the western Indian state of Maharashtra where some areas have received 23 inches of rain in 24 hours.

Authorities in Maharashtra have been forced to evacuate thousands of people from their homes as dangerously full dams released excess water, amid widespread flooding and landslides.

“Dams and rivers are overflowing. We are forced to release water from dams, and, accordingly, we are moving people residing near the riverbanks to safer places,” Chief Minister Uddhav Thackeray, the head of Maharashtra’s state government, told journalists on Friday. He added that personnel from the navy and army were helping with relief efforts in coastal areas.

At least 36 people were killed when a landslide hit the small village of Taliye, which sits around 180 km (112 miles) southeast of Mumbai, the state’s most populous city, said Vijay Wadettiwar, a minister in the state government. It is feared that tens of people may still be trapped.

#RaigadFloods: A total of 36 people died in the district due to landslides, 32 of them died in Talai and 4 in Sakhar Sutar Wadi. 30 people trapped. pic.twitter.com/XQpOBgfBFo

A further four died in Mumbai when a building collapsed, while 27 deaths have been linked to landslides and other phenomena associated with the monsoon rains.As much as 594 mm (23 inches) of rainfall have been recorded along parts of the west coast over the past 24 hours; the figure represents around a quarter of the expected annual rainfall for the state capital.

Maharashtra is not the only state afflicted by the heavy rains; neighboring Karnataka and Telangana have also reported flooding. Footage shared online appears to show a town in Madhya Pradesh, a large landlocked state, effectively paralyzed by fast flowing water.

Every year the monsoon rains cause death and destruction across the Indian subcontinent but importantly bring 70% of the country’s rainfall, vital for farmers.

Experts say this year’s monsoon rain is the heaviest experienced in four decades. More than 30 people have died in Mumbai over the past week as buildings collapsed and walls fell.