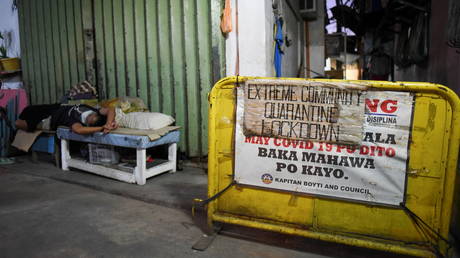 The Philippines government has issued a stay-at-home order for millions of children aged five to 17, just weeks after Manila lifted a ban on minors at public gatherings, as the country battles soaring Covid cases.

The measure was announced on Friday by presidential spokesperson Harry Roque as the “more infectious and deadly” Delta variant spreads throughout the country, sending case numbers soaring and putting hospitals under severe strain.

The stricter Covid regulations have been imposed on four provinces, as well as on the region surrounding the national capital, in an attempt to limit the further spread of the Delta strain, after 47 cases of it were detected around Manila by the health department.

As well as requiring young people to remain at home, limits have been imposed on the number of people allowed in indoor dining venues, beauty salons and at religious gatherings. Border restrictions are also being faced by anyone travelling from Malaysia and Thailand, with bans also placed on travel to India, Indonesia and Pakistan.

The move came after the OCTA Covid research group warned that a surge “in its early stages has started in the National Capital Region.”

While Manila has led the country’s Covid response, it has opted for localized lockdowns, extended curfews and stay-at-home orders to control the spread of the virus.

The country’s health department will now work with hospitals and medical facilities to ensure that they are equipped with enough beds, medicine, oxygen tanks and staff to cope if a surge breaks out.

Since the start of the pandemic, the Philippines has recorded more than 1.5 million confirmed cases of the virus and 26,874 deaths with the disease. With the country’s vaccination program underway, 14,465,786 doses have been administered. The nation’s population is 108.1 million.

‘Not a blame game’: WHO urges collaboration after Beijing rejects proposed second probe into Covid-19 origins

Twitter is taking a step towards ‘slowcial media’ by asking…