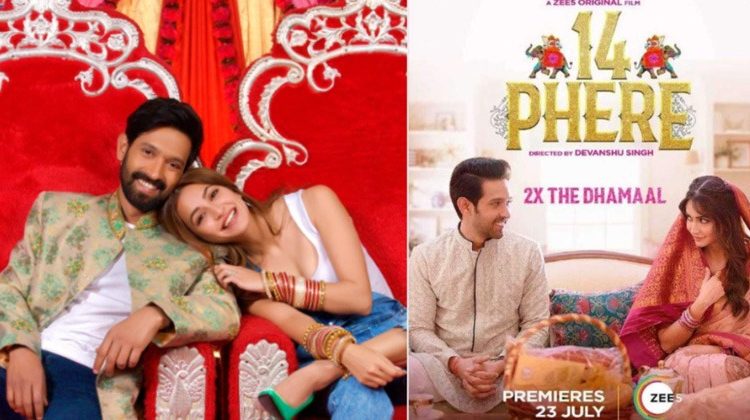 Vikrant Massey and Kriti Kharbanda’s latest offering 14 Phere explores the story of two lovers who are finding it hard to convince their parents for an inter-caste marriage. Sanjay (played by Vikrant) and Aditi (played by Kriti) meet during college, fall in love, and start living together.

As both their parents are completely against their union for their own reasons, they decided to come with a very different alternative. They decide to have two weddings with fake parents standing in for the real deal.

The film is already streaming on Zee5 platform and it seems like the movie couldn’t live up to people’sexpectations. People aren’t pleased with the movie as they felt the script is highly outdated. One of the users also had an issue with how the movie is mocking Hindu parents as it’s showing them as some kind of monsters who are against love marriages

Here’s how they reacted:

Well, it’s open to perception and it’s better that people see the movie on their own to have a better perspective.

Before the release, Vikrant had said, “I fell in love with the script immediately and can’t wait for everyone to watch it.” Kriti also echoed similar emotions and said, “Halfway through reading the script I felt a range of emotions. I was so invested in Aditi and Sanjay and couldn’t wait to know what could happen next. The intrigue I felt, reassured me that it was a kickass script and would make for a super entertaining movie! It’s not just another wedding film, that’s for sure and I can’t wait for the audiences to witness the magic that is 14 Phere.”

Director Devanshu Singh said in a statement, “This is a close-knit fun family film where you will see that bonding and emotional values are very important. The film celebrates the institution of family and marriage but questions a few basic flaws in a reasonable way. We are not trying to make fun of traditions and customs; in fact, you can watch this film with your entire family, and I am sure you will have a good time.”

Are you planning to watch it over the weekend?

Boss Feels More Irritating Than Ever? 5 Signs That Show You’re Suffering From Burnout

Thyroid dysfunction in pregnancy being overdiagnosed,…