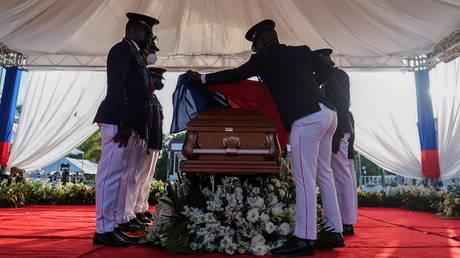 Mourners reportedly scrambled for cover amid gunshots at the funeral of slain Haitian President Jovenel Moïse. With the motive for Moïse’s assassination still unclear, protests raged as the deceased leader was laid to rest.

Foreign dignitaries, including a US delegation led by UN Ambassador Linda Thomas-Greenfield, were rushed to their vehicles during a funeral service for Moïse on Friday, Reuters reported. Witnesses at the service described smelling tear gas and hearing what sounded like gunshots outside the auditorium in Cap-Haitien, where the Catholic funeral was held. Miami Herald reporter Jacqueline Charles also described the noises as “gunshots.”

According to Reuters’ sources, there was no immediate danger to funeral attendees.

However, Moïse’s supporters have launched angry demonstrations in the two weeks since their leader’s assassination. On the eve of the funeral service, they fired guns and burned tires in the streets of the northern city of Cap-Haitien, Moïse’s hometown. Even during the funeral service, shouts of protest could be heard from outside, and Haitian officials were accosted as they entered the mass.

“Why do you have all this security, where were the police on the day of the president’s assassination?” Reuters quoted one protester as shouting at police chief Leon Charles, whom he called a “criminal.”

Demonstrators set tires on fire during a protest against the assassination of Haitian President Jovenel Moise in Cap-Haitien, Haiti, July 22, 2021 © Reuters / Ricardo Arduengo

A man argues with a Haitian National Police officer during a protest against the assassination of President Jovenel Moise in Cap-Haitien, Haiti, July 22, 2021 Reuters / Ricardo Arduengo

About Moïse’s assassination, little is known for sure. The president was gunned down at his home near the capital Port-au-Prince earlier this month, and Haitian security officers have arrested two dozen suspects, most of them Colombian mercenaries believed to have been hired through private security firms. In Washington on Thursday, Pentagon spokesman John Kirby admitted that at least seven of these mercenaries had received US training in the past, but stressed that this training is “very common” for soldiers in countries allied with the US, and was not linked to the assassination.

Several Haitian-Americans have also been brought into custody, one of whom previously worked as a confidential source for the US Drug Enforcement Administration (DEA). An unnamed US law enforcement official told Reuters last week that the source was not an active informant at the time Moïse was killed, however.

A former banana exporter, Moïse was elected to the presidency in 2016. His tenure was characterized by political unrest and a proliferation of gang violence, the latter of which he had promised to get under control. His killing has set off a scramble for power and a flurry of political maneuvering in Port-au-Prince, with acting Prime Minister Claude Joseph assuming presidential duties before resigning in less than two weeks, as the US and UN switched to backing his rival, neurosurgeon Ariel Henry. Shortly before his death, Moïse had tapped Henry to take over as premier.

Beijing sanctions several Americans, including former US commerce secretary, in first use of new law against anti-China penalties

Punjab municipal polls on Sunday, all arrangements made