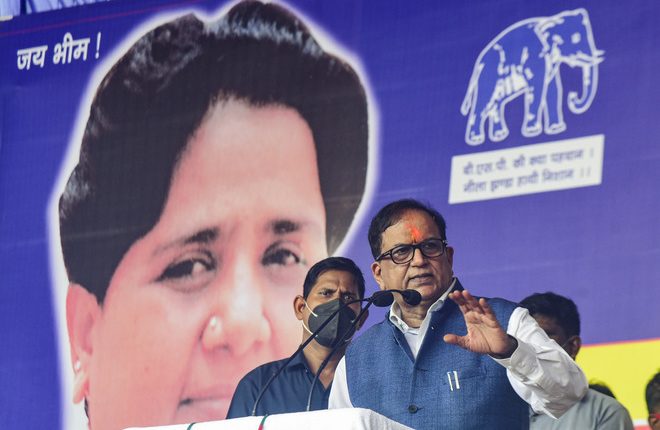 Shedding off its coyness on affirming itself on pro-Hindutva issues ahead of the 2022 Assembly elections in Uttar Pradesh, the BSP on Friday announced it would get constructed an imposing Ram Temple at Ayodhya, should it come to power, and charged the BJP of not being earnest in the matter.

“When the BSP will come to power we will seize all money they have collected in the name of construction of the Ram Temple, but are now dilly-dallying in the matter,” BSP national general secretary and Rajya Sabha MP Satish Chand Mishra said while addressing a conference of the Brahmin community in Ayodhya. The conference, christened “Prabuddh Sammelan” in Ayodhya, is the first of six such events that the BSP has lined up in various districts of UP in the first phase in a bid to woo the Brahmin community.

Mishra paid homage at the present makeshift Ram Temple and met seers and saints. He sought their blessings and grace. Traditionally, the BSP has been shy to champion pro-Hindutva causes due its sensitivity because of its Muslim support bases. — TNS

Divyanka Tripathi Hints Of A Shocker In Khatron Ke Khiladi…