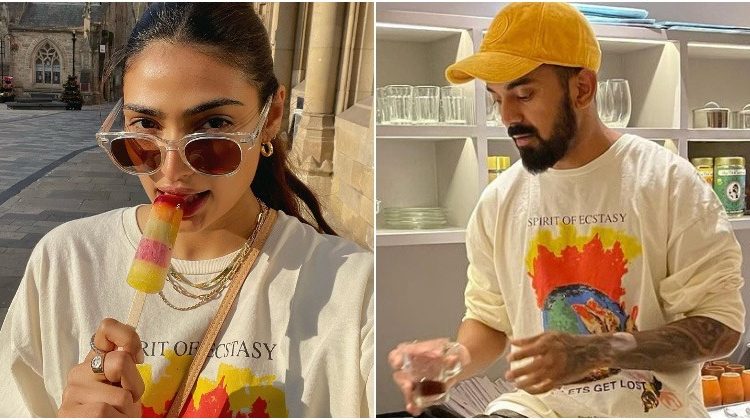 An Indian cricketer dating a Bollywood diva isn’t a new thing, as it’s been happening for ages, but every time we hear of any new names joining this elite list, it makes all of us excited all over again.

The rumours of Indian cricketer KL Rahul dating Athiya Shetty have been doing rounds for a long time.

Although, neither Rahul nor Athiya have come forward and acknowledged their relationship in public, there are enough instances that prove that both of them are indeed together.

It is well-known that Rahul and Athiya both are in the United Kingdom right now. While Rahul is there with the Indian cricket team, Athiya has apparently gone on a holiday with her brother Ahan Shetty.

“Yes, she is in England, but she is with Ahan. The brother-sister duo went there for a holiday. Rest you may check with them,” Athiya’s father Suniel Shetty had said during an interview with ETimes.

The rumoured couple has tried their best to keep their relationship a secret while enjoying their vacation in the UK but their fans have been one step ahead in foiling their attempt.

While all the previous proofs were open to speculations, Athiya’s latest picture on Instagram has all but settled the rumours for once and all.

She posted a sun-kissed picture on her Instagram account and was wearing an oversized graphic t-shirt with ‘Spirit Of Ecstasy’ written on it.

Rahul, who leads Punjab Kings in the IPL, had posted a picture wearing the same t-shirt on his Instagram handle a long way back.

Athiya perhaps borrowed the t-shirt thinking no one would notice such a small detail but she was wrong.

Earlier this month, a report in Hindustan Times had claimed that Rahul and Athiya travelled to the UK together along with other Team Indian members.

Making his relationship official, Rahul had declared Athiya as his partner in the documents submitted to the logistics department before leaving for the tour.

“The couple left India together for England for the World Test Championship last month. Before leaving, the logistics department had asked all players for names of people travelling with each of them,” Hindustan Times quoted their sources as saying.

“The players were supposed to give the names of whether they would be travelling with wives or partners, for which KL Rahul listed Athiya Shetty as his partner. She travelled in the same bubble and stayed in Southampton with the team,” the report added.

Earlier, Suniel Shetty opened up about his daughter and her rumoured boyfriend during an interview after both of them were chosen as brand ambassadors of an international eyewear brand.

“As far as the ad goes I mean it is an international brand and they chose to take the two of them as ambassadors. I think they look brilliant together. They are a good-looking couple, na? So, it totally works from a brand perspective. And I must say, they look good together, well, in the ad (laughs!),” Suniel Shetty told ETimes.

Meanwhile, ahead of the England Test series KL Rahul has put the team management and selectors in a dilemma by scoring an unbeaten hundred during the warm-up game against County Select XI in Durham.

German army officer who posed as Syrian refugee on trial for…