‘We Don’t Realise How Deep Rooted Patriarchy & Misogyny Are’: Vidya Balan On ‘Natkhat’ 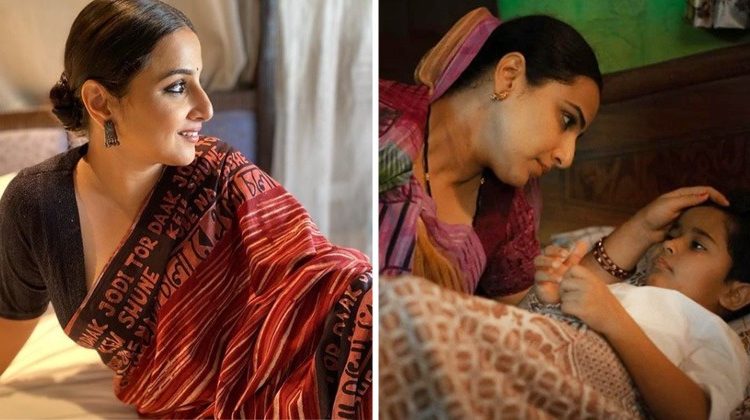 She is a charmer and doesn’t need words to show her emotions on the screens because her expressions do the magic. She is beautiful, speaks from her heart, and has given us roles that made us look up to her. We are talking about the one and only Vidya Balan who has the power to lift your spirits up with a simple conversation.

Vidya’s short film Natkhat is among the Indian films that are in the race for Oscars 2021 in the Best Short Film (Live Action) category. She hasn’t only played the lead character in the movie but is also one of the producers of the movie. Well, I was lucky enough to watch the movie before it releases on VOOT as part of a film festival on the OTT platform with many more short films releasing in the near future.

The short movie might have a run time of just 33 minutes but is so powerful that it leaves you unsettled because the director Shaan Vyas and Vidya Balan have explored so many talking points mainstream cinema steers clear of. From domestic violence to child abuse, the movie shows a mother teaching a lesson to her son about the rigid patriarchal notions that he doesn’t have to follow and how to treat a woman right.

I got a chance to talk to Vidya Balan where we talked about her character in Natkhat, how patriarchal mindset and misogyny are normalized in an Indian household, and much more.

Here are excerpts from my interaction with her:

It was extremely powerful and I was amazed that Shaan Vyas had chosen to tell this as a short film because it’s like a punch on your gut. Today after watching the movie, I am glad that he presented it as a short film because it may have been too much to take as a full feature-length movie. He has managed to tell the story within those 33 minutes without compromising any elements which is truly commendable.

While watching the movie, I also realized how toxicity has been naturalized in Indian households. In one of the sequences, your character is seen serving chapatis to men, hidden behind the ‘ghoonghat’. What’s your take on that?

It’s normalized to such an extent that we don’t even realize there could be any other possibility. We don’t even realize how deep-rooted this patriarchal mindset and misogyny is. That shot at the dining table is one of my favorite shots because you only see men chomping on their food and their moustaches. It’s staged perfectly.

There’s this one thing that hit me real hard watching the movie that how a child is taking the wrong inspiration from the men and is implementing it in his real life. What do you have to say about it?

It’s high time that we realize that children learn by example and not by instruction. You can tell the child to do the right thing but if you aren’t doing it by yourself, he or she will not do it because children mimic the behaviour of the elders. What also makes you uncomfortable while watching the movie is this innocent child saying, ‘ladki agar tang kare toh usko uthwado’ and it’s a big thing but he is not realising the gravity of it. He has heard adults talk like that.

One more thing I really liked was how the director has beautifully weaved the story of King Rudra and Urmi into the narrative so that you can make the child understand the point. It somewhere sets the example for new moms on how to teach their sons to respect women.

I think storytelling is so powerful and you do get impacted by stories. This is why we narrate stories to our children and if you can make your child think differently through a story, isn’t that amazing? She (Vidya’s character Surekha) is talking to the child through a story so that he can understand because he likes to listen to stories every night. She chooses to tell this particular story because that would change his outlook and his attitude does change. I feel she feels powerless to change her own situation so she wants to make sure that her son doesn’t turn out like the men in her life.

As you said she is powerless but in the end, you see her removing all the scars from her face. How do you see your character’s journey?

She is trying to very subtly tell her child that if you hurt another woman, ‘I get hurt’. Therefore, when she realizes that he has understood the moral of the story and he is a changed child, she chooses to remove all her scars. Well, the scars are still there beneath her makeup as you can see little white makeup patches where she had bruises. He thinks his mother isn’t getting hurt for the child as he is on the right path. Hopefully, the child will someday give her the strength to fight the domestic abuse at her home. Her context is different from me and you, but what’s empowering is that she had the strength to change her child’s attitude.

We have been talking about the child in the movie and I want to say that your camaraderie with the child artist is simply beautiful. It made me wonder that if you have a son, he is going to learn a lot from you.

Thank you (laughs). Do you know that Sonu (child artist) has been played by a girl called Sanika? She is adorable and I also forgot that she is a girl on the set because we kept calling her Sonu. What an actor!

Vidya, you did so well with Sherni but people found it slow and didn’t understand the undertones in the movie that had a powerful message. How do you handle this negativity and criticism?

Firstly, I am grateful for all the love that has come my way. If there’s an audience of 100, not all 100 are going to like it and you can only hope that 80 will like it. That’s exactly what happened with Sherni. This is the way that the director chose to tell the story. It’s his conviction and he was true to it.

When you were doing Kahaani, we met and I remember we were discussing the fact that we need to have more women-centric narratives and the change had just begun. Now, there’s a clear shift as there are more and more movies on women characters. What do you want to say about this gradual but certain shift that has happened over the years?

It’s only getting better and I am so thrilled. There is a wide variety of female roles that are being written and then made into films. You are seeing various aspects of women being captured on celluloid. It’s not a unidimensional woman that’s being portrayed on the screen. I think we are finally being treated as human beings and are being accepted for our flaws. We are awesome women, with our flaws.

You have done many characters in your cinematic career. Which is the character that you felt was the most powerful and you took back the shades of that character home?

Honestly, I would feel that I am being unfair if I did that. But, I think every character does leave you with something. It leaves an impact on you and sometimes even changes your outlook. It’s like when you spend time with a person, the interaction that you had with him or her does leave an impact.

Before I go, I want to know what you are taking back from Natkhat.

For me, the most beautiful part of the movie was when Surekha tells Sonu that we all are the children of the same God. I have been brought up with this belief but this film reminded me of that.

We wish Vidya all the best for her upcoming release and really wish that she keeps inspiring us with her characters in the future.

Watch: Players In Pakistan Attack Each Other With Bats In Charity Game & It’s Pure Chaos

Naezy on how impactful hip-hop & rap can be