Over half of EU adults fully vaccinated against Covid, as bloc’s slow rollout picks up speed 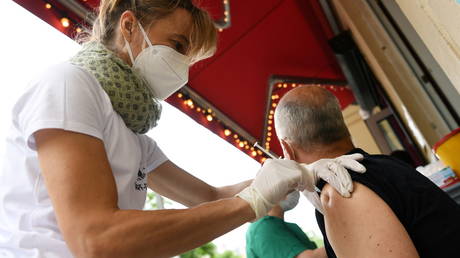 The European Commission has announced that 54.7% of adults across the EU have been fully inoculated against Covid-19, with more than 200 million people having received both doses of a vaccine.

Announcing the milestone at a press briefing on Thursday, European Commission spokesperson Dana Spinant stated that the bloc was on target to vaccinate 70% of EU adults by the end of the summer, having already administered 81 doses per 100 people.

However, despite the overall figure for full inoculation now surpassing more than half of all EU adults, there is significant disparity across member states, with some countries having a much higher vaccine uptake than others. For example, while Finland and the Netherlands have administered two doses to more than 75% of their adults, Romania is lagging behind, having fully inoculated only 31%. Bulgaria has administered a first dose to just 20% of its adult population.

WHO declares 3rd wave of Covid-19 pandemic, says gains from vaccines have been reversed as Delta variant spreads

The bloc’s vaccination rollout has been marred by the slow start that saw criticism laid at the EU’s door for centralizing the responsibility of purchasing and distributing vaccines. Member states had initially been prohibited from making their own deals directly with vaccine manufacturers, but a number of countries ignored this rule, Hungary and Slovakia purchasing Russia’s Sputnik jab, and the Czech Republic, Germany, and Poland opening negotiations for supplies from Moscow.

In February, European Commission President Ursula von der Leyen accepted that her team had been “late” to authorize jabs and had put too much faith in the production capabilities of manufacturers.

The announcement of the vaccination figures on Thursday comes as a number of member states implement domestic measures in an attempt to control the spread of the Delta variant and after the EU recently rolled out a digital Covid certificate to facilitate freer travel across the bloc.

The digital certification provides travelers from the EU’s member states with a central place to show their vaccination status, negative test result, or proof of having recovered from the virus in the past six months. The move has been called a “work in progress” by the European Commission’s Henrik Hololei, who acknowledged that it should have been introduced earlier, but it is seen as a way of allowing citizens to comply with the necessary entry requirements as restrictions ease and travel picks up.

On Wednesday, France launched its national Covid health pass, restricting access to cinemas, museums, and sports venues to those who have been vaccinated, had a negative test, or have recently recovered from the virus. Despite the measure facing domestic opposition, with some protestors accusing President Emmanuel Macron of running a vaccine “dictatorship,” lawmakers are considering extending the pass from August to cover cafes, restaurants, and shopping centers.

The Italian government is currently weighing up whether to expand its own ‘green pass’ to cover venues in a similar manner to France, with health officials in Rome citing nationwide support for the pass, which is aimed at ensuring the country can remain open instead of falling back into a lockdown.

At least 18 inmates die, many police injured as more riots break out at prisons in Ecuador