Make your mind up: Guinea ‘will send team to Tokyo Olympics’… just hours after announcing withdrawal over Covid fears 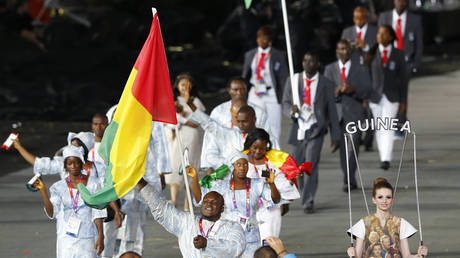 Guinea will send athletes to the Olympics in Tokyo this summer after reportedly reversing a decision to withdraw from the sporting spectacular due to coronavirus fears.

Minister of Sport Sanoussy Bantama Sow had announced on Wednesday that the West African nation would not be represented at the delayed Games, citing fears over athletes’ health.

“Due to the rise in cases of Covid-19 variants, the government, out of concern for the health of the Guinean athletes, has regretfully decided to cancel their participation,” Sow had said.

That decision seemed set to scupper the hopes of the nation’s five Olympians, who were due to compete in athletics, judo, wrestling and swimming.

The Olympics formally open in Tokyo on Friday. © Reuters

However, according to the BBC, Guinea will now send a delegation to the Tokyo Games.

“Guinea will participate in the Tokyo Olympics. It was not a question of finances,” said Sports Minister Sow.

The apparent U-turn means North Korea remains the sole nation to pull out of the Games entirely, after Pyongyang announced the move in April over Covid-19 fears.

The Tokyo 2020 opening ceremony is on Friday, with the Games running until August 8.