Kneeling to pressure? Olympics WILL include images of athletes protesting on social media in apparent policy reversal 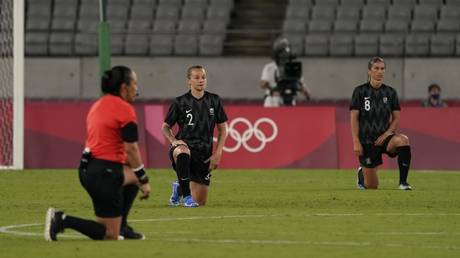 The International Olympic Committee (IOC) has said it will include images of athletes taking a knee in its official social media content and highlights packages, after claims organizers had banned such content from being shared.

Players from several women’s football teams took the knee before their opening matches at the Tokyo 2020 Games on Wednesday.

However, the images were not included in the official Olympics highlights packages provided to media outlets which did not broadcast the action live, nor were they included in any of the official Tokyo Games output on its various social media channels.

A report by UK outlet the Guardian claimed that IOC and Tokyo officials had banned their social media teams from posting images of athletes taking a knee, even though a concession was made under Olympic Charter Rule 50 prior to the Games to allow competitors to make the gesture.

In an apparent U-turn on keeping its social media accounts a protest-free zone, the IOC has now said it will include images of athletes protesting.

“The IOC is covering the Games on its owned and operated platforms and such moments will be included as well,” the organization said on Thursday, the AP reported.

The official Tokyo 2020 Opening Ceremony takes place on Friday, although events such as the men’s and women’s football have already got underway.

The Great Britain and Chile women’s teams both kneeled before their match and were followed by the likes of the USA, Sweden and New Zealand.

The Australian team, known as the Matildas, posed with an Aboriginal flag before their match with New Zealand.

Concessions mean gestures such as taking a knee or raising a fist are permitted before events, but the IOC will not allow any form of protest on the podium at medal ceremonies. Any athletes who do so face disciplinary actions.