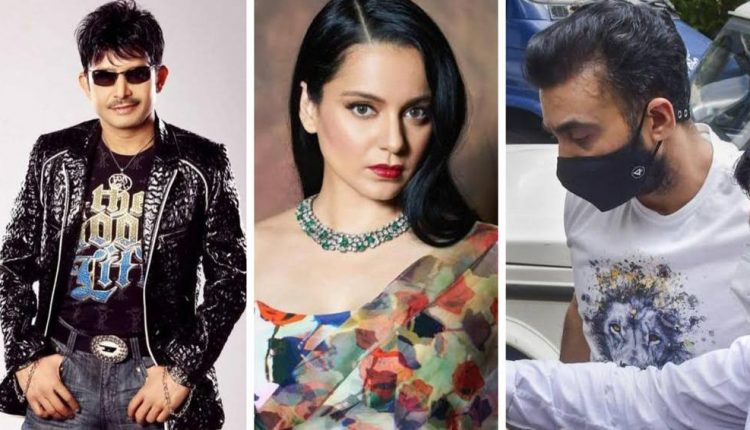 Actor, and self-proclaimed critic, Kamaal Rashid Khan, also known as KRK, is known for his controversial tweets and videos.

Many people are asking me to release video about #RajKundraArrest but I can’t do that. @TheShilpaShetty is the senior actress in Bollywood and I respect her a lots. Hope all will be OK soon!

Poonam Pandey claims Raj Kundra ‘leaked’ her number along with text, ‘call me, I’ll strip for you’
Trouble brews for Raj Kundra as actresses level charges
‘We may not always….’: Shilpa Shetty’s post ahead of Raj Kundra’s arrest grabs eyeballs

He adds: ‘I don’t have any problem if #KanganaRanaut calls Bollywood a gutter. But I just want to ask her that what she is doing in that gutter? She should live in her beautiful city Manali instead of gutter. Aakhir Kangana Ki Kaya majboori hai, Iss Gutter main Rahne Ki?’

I don’t have any problem if #KanganaRanaut calls Bollywood a gutter. But I just want to ask her that what she is doing in that gutter? She should live in her beautiful city Manali instead of gutter. Aakhir Kangana Ki Kaya majboori hai, Iss Gutter main Rahne Ki? https://t.co/KwrXNYGwnM

For the unversed, Raj Kundra has been sent into police custody till July 23. He was arrested on Monday night on charges of creating pornographic content and publishing the same through mobile applications.

Earlier in the day, YouTuber Puneet Kaur has opened up against arrested businessman Raj Kundra saying he had approached her via social media direct messaging for his mobile app, through which pornography content produced by him was reportedly published.

Bharti Singh reveals she was inappropriately touched by show coordinators: They would rub their hands on the back

Smog puts every person in Lahore at risk: Amnesty

Lex Sportel brings you the first-ever LIVE cricket under…