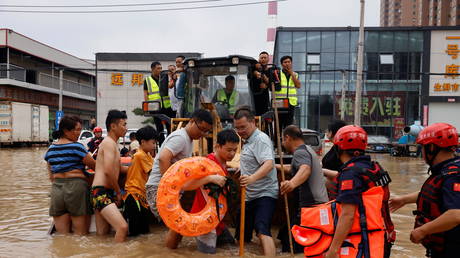 Thousands of people are being evacuated from their homes in Henan province by a 76,000-strong relief force, as the meteorological office warns that storms and heavy rain is set to continue.

On Thursday, officials raised the death toll from the devastating floods to 33, as rescue workers battled to evacuate hundreds of thousands from further danger. Twelve of the 33 died when the subway in the provincial capital of Zhengzhou was flooded by storm waters.

The deadly weather is set to continue, with the province’s meteorological bureau raising the storm alert to red – the highest of the four-stage warning codes – for four Henan cities: Xinxiang, Anyang, Hebi, and Jiaozuo. While the skies have cleared over Zhengzhou, the flood waters remain high – waist height in some places.

More than 73,000 people were being evacuated from the city of Anyang on Thursday. Footage shared online shows emergency crews ferrying locals to safety throughout the region.

#China🇨🇳: According to local authorities, more than 500 people have been evacuated from 4 flooded counties in northern #Henan as of Thursday morning.

Anyang, which sits on the Henan border with Hebei province, has seen more than 600mm (23in) rainfall since Monday, according to the state-run Xinhua news agency.

Previous meteorological records were broken in Xinxiang, after the city recorded 812mm (32in) of rainfall between Tuesday and Thursday, according to Xinhua. The figure for those three days is greater than the entire annual rainfall of Beijing for a whole year. As a result, seven reservoirs around the city flooded, impacting nearby towns and villages.

The economic damage was estimated by Xinhua to be 1.22 billion yuan ($189 million), although the figure is likely to grow as the extreme weather spreads northwards. The agency stated that 470,000 people and over 55,000 hectares of crops have been impacted so far. The sheer scale of the damage is clear from videos and photos shared online.

On July 20th, 2021, the heaviest rainfall ever seen in China fell in Zhengzhou, Henan Province.

An entire year’s worth of rain fell in 24 hours. Eight inches of water fell in 1 hour.

According to official reports, almost the entire city of over 10 million people is under water. pic.twitter.com/ol26Hd78FB

Since daybreak, more videos have been posted that show just how bad the situation in northern Henan is right now. In Weihui, the water reaches up to the neck. pic.twitter.com/eRsgJqm3D9

There are different rules for different players in Indian…