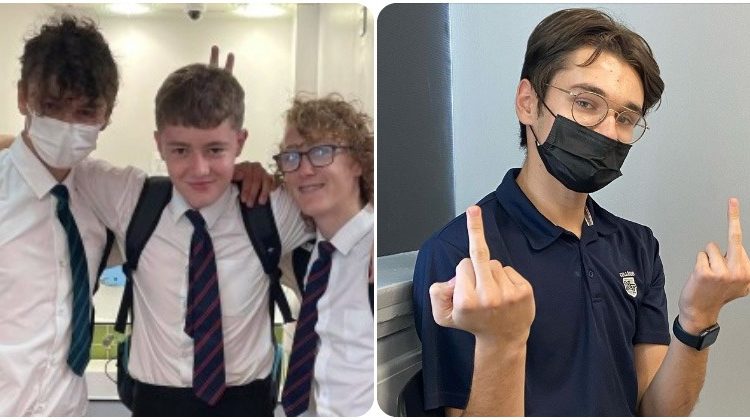 Ever since the beginning of time, a lot has been spoken about rules and stereotypes. But as people are evolving and becoming aware of their surroundings, they are now protesting against such inhibitions.

Recently, a group of boys decided to wear skirts to school to decry the double-standard on how society views men and women.

Clothes indeed have no gender, and hence, these students came forward to support the battle for gender equality.

While this was one incident, in another news, very recently, a group of 10th-grade students in the UK stood against the strict dress code of their school.

After being told they could not wear shorts and had to continue wearing trousers, they decided to protest and wore skirts instead amid the ongoing heatwave.

This comes from Cornwall, where the people have been fighting the scorching heat, and due to the ‘heat alert’ as issued by the Met office, these students wanted to steer clear of wearing trousers.

Pupil Adrian Cop and some of his friends decided to find a loophole in the school policy and noticed that there is nothing written against wearing skirts, and it doesn’t assign any gender.

Hence, Adrian and his friends donned skirts and started a movement against the school’s policy.

Since Adrian didn’t find a skirt, he asked his mother for it and wore a pleated skirt to school along with his schoolmates, Scott Penman and Connor Humphries. Even his mother didn’t criticise him, instead, she backed him and got him an Asda skirt.

These teenagers who decided to continue wearing skirts for a week said, “I found it a lot cooler definitely. It’s really uncomfortable wearing trousers in this heat. It was a mixed bag. Some teachers thought we were messing about. But there were others who cheered us on.”

He also added that they were removed from classes and were asked not to socialise for the next 24 hours but were let go as the teachers could not find anything valid to pin on.

Adrian mentioned that they haven’t broken any rules and wore skirts only to prove that wearing shorts amid the heatwave is not bad for girls and boys, both.

Donna, Adrian’s mother, also supported his son and said this argument has been going on for years. She also that she is proud of Adrian for taking a stand.

The school’s uniform guide reads, “Students must wear plain black tailored trousers made of standard material that sits at the waist and shoe line. These must be of a style that is complementary of a blazer. Skirts must be pleated and sit no higher than a credit cards width above the knee.”

Back in June, a group of male teachers in Spain decided to battle against gender norms by wearing skirts to the class.

The ‘Clothes Have No Gender’ protest has grown by leaps and bounds as many people in different countries continue to eliminate gender discrimination. We are nothing but proud and hope to see a change in the near future.

Glad we picked early wickets, hope we can continue doing…