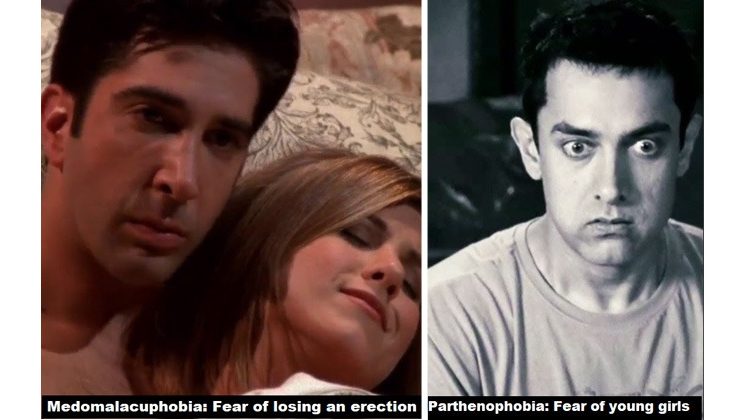 It’s pegged as one of the most profound and exhilarating experiences, something that people say ends up making them feel out of this world.

And while it may be all that and more for most people out there, there are also some who don’t feel as excited thinking about sex, as they feel scared.

Now, this isn’t the ‘how will it feel’ or ‘I am nervous’ kind of a scare, but a fear that almost stops you in your tracks to go further. We are talking about sexual phobias which are known to be a genuine phenomenon, making sex look not just intimidating but also frightening.

Just like how certain people fear the dark, there are a select few who fear what is usually done in the dark, if you know what I mean…

And since you can’t really explain the fear or where it’s stemming from, only people who experience it can relate to the feeling.

Here are some of the most uncanny sexual phobias that people may have:

This is the fear of having sexual intercourse.

People having this phobia might feel comfortable in getting intimate, even making out, but as soon as things would escalate towards a home run, they’d rather run back home. Indulging in penetrative sex is what scares them.

People having gymnophobia have a fear of shedding their clothes in front of anyone, because nudity makes them deeply uncomfortable.

Whether it’s them taking their clothes off or their partner, the act of being naked scares them.

This is a broader phobia on the list, one which has people fearing the entire topic and act of having sex.

For them, even the thought, people and conversation of doing it creates fear in their head, leading them to abstain from it altogether.

People who experience Chiraptophobia have a fear of being touched. And that doesn’t just mean sexually or intimately, but sometimes even a casual brush, or a pat on the back will make them scared and anxious.

As the name suggests, this means having a phobia of a penis. And before you wonder, yes men and women both can experience it.

Women would feel scared touching or even seeing a penis while men may fear getting an erection because an erect penis might irk them.

This one means having a fear of the vagina, and just like phallophobia, this also is common with both men and women.

Women and men having this phobia would be afraid to touch or indulge in anything sexual related to the vagina.

Even though all phobias are described as being irrational, and they are too, this one is still pretty understandable.

Philemaphobia means having a phobia of kissing for the fear of transferring/contracting germs. Although the fear only restricts them from the act of kissing and not indulging in sex.

This means having a fear of losing an erection, a phobia that many men suffering from erectile dysfunction also have.

In this case, men tend to experience very high anxiety and performance pressure that leads them to start fearing losing an erection during sex.

This phobia is a kind of an anxiety disorder under which a person may fear getting into a situation that will make them feel entrapped, threatened, helpless or embarrassed.

A phobia that often develops in sexual abuse victims too, people suffering from this tend to avoid any situation or places that will make them feel compromised.

A rather unusual and less heard kind of a phobia, this one is when people have a fear of young girls, especially if they are virgins.

Living up to the irrationality bit of it, this phobia makes it hard for people to even go outside without anxiety of coming near young girls.

‘We Don’t Realise How Deep Rooted Patriarchy & Misogyny Are’: Vidya Balan On ‘Natkhat’