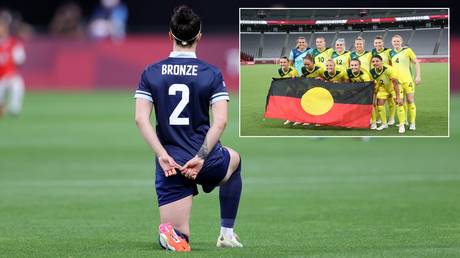 Though the opening ceremony is not until Friday, the Olympic Games in Tokyo have already gotten off to woke-fueled start with stars making their voices heard before global audiences.

Getting their women’s football campaign off to a solid start with a 2-0 win over Chile, Team GB, as promised, took the knee before their opening game on Wednesday along with their South American rivals.

“As players in Great Britain we’ve been taking the knee in club and international matches and we felt strongly as a group that we wanted to show support for those affected by discrimination and equality,” said captain Steph Houghton.

Team GB take the knee, Chile do as well. USA and Sweden follow suit and then New Zealand do it.
Women footballer showing how it’s done! Class act.#TeamGB #Tokyo2020 pic.twitter.com/bBNgrw7fus

“It was a proud moment because the Chile players took the knee too to show how united we are as sport.”

And while there were initially suggestions that the Team GB action caught Chile unaware, midfielder Karen Araya claimed a simple misunderstanding was to blame for the two sides’ stuttered joint statement.

“It was an issue of not being in sync,” she said.

“We weren’t able to communicate properly due to the language. The moment we saw the English taking the knee right away we decided to do the same and of course we are in favor of this type of thing.”

It goes without saying of course that Team USA took the knee, with their woke crusader and skipper Megan Rapinoe explaining it was “an opportunity for us to continue to use our voices and use our platforms to talk about the things that affect all of us intimately in different ways” after a 3-0 humbling against Sweden, which was their first loss in 44 games.

Women’s soccer players from the UK, Chile, Sweden, New Zealand and the U.S. took a knee to protest racial inequality before their games on the first day of #TokyoOlympics events.

The IOC has relaxed rules to allow protests before events, but still bans protests on the podium. pic.twitter.com/lTTcltMJRQ

Seeing a lot of people happy that the US lost to Sweden because they took a knee.

Boy do I have some news for those people. pic.twitter.com/axdLwmhEe6

“We have people from Team USA, from all over the country, from all backgrounds, and people literally from all over the world for every other team so I obviously encourage everyone to use that platform to the best of their ability to do the most good that they possibly can in the world, especially as all eyes are on Tokyo these next couple weeks,” she continued.

“We’re on the global stage, with the world’s media, and eyeballs and people’s attention, all drawn to one place with a collection of incredible athletes from all over the world, who care a lot about what they’re doing here in Tokyo in terms of their sport, and who care a lot about a lot of other things.”

In an installment of a regional derby, Australia’s Matildas earned praise from a section of their fanbase for not taking the knee like their New Zealand rivals.

But they did display the traditional Aboriginal flag rather than the more familiar Australian one.

“We are really proud of it,” said captain and star striker Sam Kerr after her side had wrapped up a 2-1 win.

Matildas took their team photo behind an Aboriginal flag instead of their usual Australian flag today pic.twitter.com/5N0sL8e5et

“It’s something we spoke about a lot as a team. We let the Indigenous girls drive it.

Yet while these protests have been seen by millions worldwide and have filled countless column inches, a report from The Guardian claimed the IOC and Tokyo 2020 organizers have ordered their social media teams not to post any pictures of content of Olympics athletes taking the knee.

The command was supposedly passed down from bigwigs on Tuesday evening with the Team GB women’s clash against Chile in Sapporo in mind, and has confused some.

More specifically, an insider told the British newspaper that they found such an approach strange given that the IOC has celebrated iconic photos such as that of Tommie Smith and John Carlos raising their fists against African-American oppression at the 1968 games held in Mexico City.

With Rule 50 relaxed – which previously prohibited “demonstration or political, religious or racial propaganda in any Olympic sites, venues or other areas” – this is only the beginning.

If you like your sport with a healthy dollop of virtue-signaling, it looks like you’re in for a treat in the next two weeks; and if you don’t, well, you might need to think about tuning out now.

Indian teenager to train in Rome based basketball academy

Where the coronavirus data stands in the U.S. and world:…