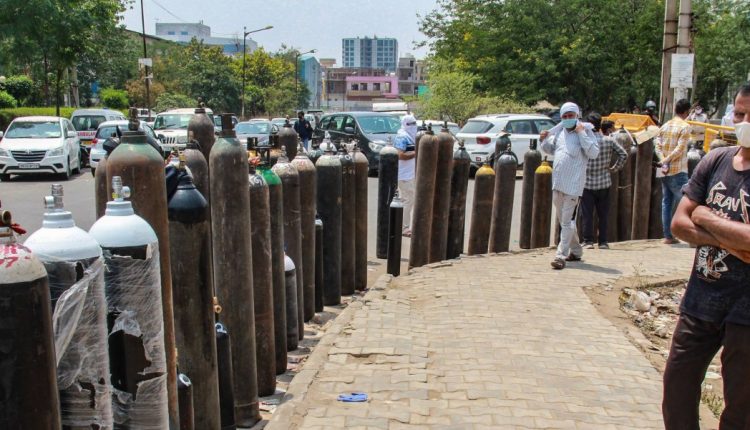 People wait in line to fill empty oxygen cylinders during the second wave of COVID-19 in India, May 5, 2021. Photo: PTI

New Delhi: The Union government informed the Rajya Sabha on Tuesday that state governments and Union Territories did not specifically report any deaths due to lack of oxygen during the second wave of COVID-19.

Responding to a question on whether a large number of COVID-19 patients died on roads and hospitals due to acute shortage of oxygen in the second wave, minister of state for health Bharati Praveen Pawar noted that health is a state subject and states and UTs regularly report the number of cases and deaths to the Centre.

“Detailed guidelines for reporting of deaths have been issued by the Union Health Ministry to all states and UTs.

“Accordingly, all states and UTs report cases and deaths to the Union Health Ministry on a regular basis. However, no deaths due to lack of oxygen have been specifically reported by states and UTs,” Pawar said in a written reply.

While the statement does not deny that deaths occurred due to the lack of oxygen, it is reminiscent of the Union government’s refusal to collect data about deaths of migrant workers during the COVID-19 lockdown last year.

A database compiled by The Wire in May this year listed 223 COVID-19 patients who died due to a shortage of oxygen. The database also listed another 70 deaths where families of patients alleged that the lack of oxygen was to blame, but was not confirmed by authorities. Since The Wire‘s database relied only on confirmed cases that were reported in the media, the actual death toll may be much higher.

The devastating second wave of infections in India, which peaked in April and May this year, saw India upwards of 400,000 cases in a single day. As cases spiralled out of control, the healthcare system collapsed. Apart from deaths due to lack of oxygen, there were also instances of people dying outside hospitals, waiting to be admitted.

In the same response, the government admitted that there was an unprecedented surge in demand for medical oxygen during the second wave, peaking at nearly 9000 MT compared to 3095 MT in the first wave.

“However, due to unprecedented surge in demand of medical oxygen during the second wave, the demand in the country peaked to nearly 9000 MT as compared to 3095 MT during the first wave the central government had to step in to facilitate equitable distribution to the states.”

“A dynamic and transparent framework for allocation of medical oxygen in consultation with states and UTs and all the stakeholders such as relevant ministries, manufacturers/suppliers of liquid oxygen, etc. was prepared,” the written reply stated.

The active caseload of the state and UT was the primary determinant of oxygen allocation. Other factors such as case doubling rate, available medical infrastructure, etc. were also given due consideration.

Further, the allocation was kept dynamic as per the changing pandemic load.

The post States, UTs Didn’t Report Deaths Due to Lack of Oxygen During Second Wave: Centre appeared first on The Wire Science.

Just walking around can help you live longer