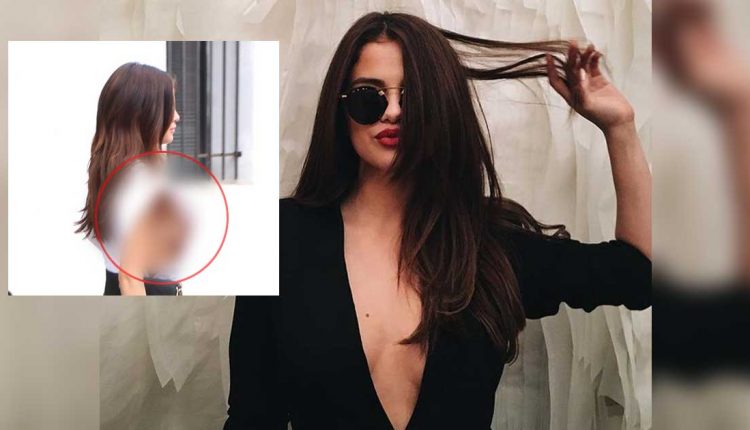 Selena Gomez is a talented pop star, actress, and producer. But you know what she’s bigger of them all? A Fashionista! Trust her to give you the perfect kind of inspirations, be it for the beach outings or red carpet events. But not every appearance is always at its best. Celebrities often suffer wardrobe malfunctions, at worst nip slips! Read on for the scoop we have today.

It was back in June, 2017 when Selena was busy promoting one of her tracks. The actress opted for a white top with flared-out shoulders with a deep plunging neckline. She paired it up with gray capris and white stilettos. A statement belt gave a top-notch appearance to the whole look.

Selena Gomez left her waves loose and opted for minimal nude makeup. The look was 10/10 but things went a little off-track when the Rare singer walked carrying it in LA. To a surprise, one could witness the actress-singer’s side-bo*b as she appeared in front of the press.

That was still okay until many snapped Selena Gomez suffer a nip slip in certain snaps. The pictures went viral in no time, as expected! Sel, however, treated it like nothing happened and moved on with her kickass promotional spree. That’s like a true diva, isn’t it?

Check out the viral pictures from the look below:

Selena Gomez Just Had a Major Nip Slip, But Naturally Made It Look Chic https://t.co/MX3SqfbHPd pic.twitter.com/f4fRr64Ow1

Meanwhile, Selena Gomez will be next seen in her upcoming series, Only Murders In The Building. It is a comedy series created by John Hoffman and Steve Martin.

Only Murder In The Building also stars Steve Martin and Martin Shorts in leading roles. It is all set to premiere on Hulu on 31st August, 2021.

Must Read: Godzilla vs Kong Box Office: Adam Wingard’s ‘Monster’ Is Now Of $100 Million+ In The Domestic Market

The post When Selena Gomez Accidentally Suffered A Nip-Slip While Only Intending To Flaunt Her Side B*ob! appeared first on Koimoi.

This blood-drawing robot is more accurate than humans