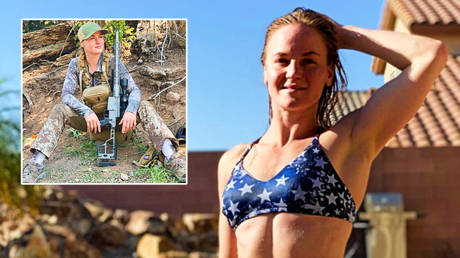 UFC queen Valentina Shevchenko has spoken of the joy she took in taking part in a demanding gun competition in the US, where she was part of a hunting group who hiked for miles to shoot at animals including bears each day.

MMA sensation Shevchenko has long trumpeted her love of firearms and gun culture, making the current women’s flyweight champion an enthusiastic enlistee for a quest arranged by a gun company in Wyoming.

That involved waking at dawn and setting off on exhaustive missions with professional hunting guides in an intrepid adventure that called upon many of the qualities she has developed in her formidable fighting career.

“We were 10 teams, hiking for eight hours each day in elevation of 9,000ft, shooting 22 steel targets with the largest distance of 1,000ft,” explained the seemingly fearless Kyrgyzstani-Peruvian.

“I enjoyed every single moment of this tournament, spending time on the nature, sleeping in a tent under the stars and, of course, I got to know so many amazing people sharing the same passion as I am.”

Those people included a sniper, former navy seals and an outfitter and shooter as part of a group setting off from a ranch.

Shevchenko loves her Mosin–Nagant – known as Mosin’s rifle in Russia – and also enjoyed familiarizing herself with other weapons on the “incredible experience”.

“My love for the shooting, the competition, for everything,” she told John Bartolo when the gun industry fanatic asked the 33-year-old what had driven her to take part in a daunting quest.

“This competition was a mix of shooting and super-hard cardio. We woke up at 5am and… you have to climb to the mountains fast enough because it’s all about time.

“You have to find your position to shoot and then there are only 50 minutes to shoot. Then you get 30 minutes to change position and you have to do that for ten stages.

“I got so much experience. When you have to hike for that many hours, deal with your gun, pack and unpack it load and adjust all this stuff, it becomes like your natural habit. I really hope to [return] next year.

“Everything was so good that in the future I think it is going to be a sport. If you want success, you have to do everything the best you can.

“It’s like fighting: when I train, I train the best way I can because I know that’s the way to be successful and continue to be the champion.

“I know that if I spent less time on training and more time on social media, it would affect me in a bad way. I think everyone knows that, but you have to remind yourself of that.

“It’s easier to open social media than to open the gym and do what you have to do.”

Shevchenko defended her title for a fifth time when she beat Jessica Andrade by second-round TKO in April.

South Korea, US to set up combined army division