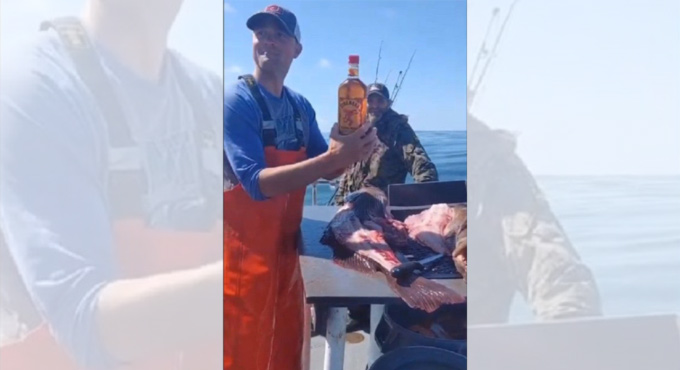 The sight of a fisherman finding an unopened bottle of whisky in a fish is the viral video of the day.

In the clip, the fisherman can be seen popping the fish on a table to be filleted, first carving off a large piece and then starts working on the innards.

But then, he notices something unusual in the stomach. The fisherman cuts the organ and squeezes out the strangely hard object. Much to his surprise, the object turns out to be an unopened bottle of Fireball Whiskey by which he says to his pals that he’s hit the ‘jackpot’.

The video has made its way onto TikTok, Instagram, Facebook, and other social media platforms. However, people have been trying to work out whether the footage was real – and if so, how the fish managed to devour the whole bottle.

Some users said that the fishermen probably shoved the bottle down the throat of the creature after bringing it on board, and then filmed the video to make it seem like an unusual discovery.

Although it’s sadly not unusual for ocean creatures to swallow mankind’s rubbish that has caused a great deal of harm to the creatures in oceans, many wonder why anyone would throw out a perfectly good bottle of Fireball in the ocean?

The post Watch: A fisherman finds an unopened whiskey bottle in a fish’s stomach appeared first on Telangana Today.

Batra re-elected as FIH President for a second term