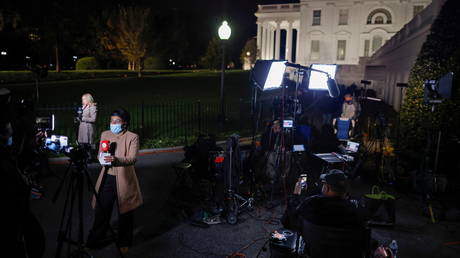 An alarming new study on media consumption around the world has found that trust between news organizations and consumers is at the lowest in the United States.

Americans are not only distrustful of traditional media outlets, but consumption of the news has also waned since Donald Trump left office, according to the Digital News Report 2021 produced by Oxford University and the Reuters Institute for the Study of Journalism.

Asked whether they agreed that “most news” can be trusted a majority of the time, only 29% of US respondents agreed while 44% strongly disagreed, and 27% neither agreed or disagreed.

By comparison, trust in the media over all the 46 markets – approximately 2,000 participants each – studied sits at 44%, which is an increase from 38% last year.

The study points to cable news networks such as Fox News, CNN, and MSNBC as fueling distrust through polarization on political topics.

One of American consumers’ biggest gripes with the media also happens to be bias, as many feel their age groups and views are not represented “fairly” by the news.

This feeling is especially prevalent on the right, with 75% saying media coverage of their views is “unfair” and only 16% arguing it is fair. Only 34% of people identifying themselves as on the “left” feel the same way about their views being represented, while 51% say they are fairly represented.

The new media report shows that interest in news consumption generally is also slipping in the US, mainly for right-leaning customers thanks to the lack of the ‘Trump bump’. In 2020, for instance, 74% of respondents who identified as “right-aligned” said they were very interested in the news, but that number dropped to 57% now that Trump is out of office.

“Our data show signs that many former Trump supporters may be switching away from news altogether. Almost all of this fall in interest came from those on the political right,” the report noted.

While some countries saw a rise in media interest with people looking for the latest information during a turbulent year plagued by Covid-19, the study found that there has been an overall decline in interest, similar to the US, with Spain, the UK, Italy, Australia, and others seeing steady declines from previous years.

The country with the highest percentage of trust for the media, according to the study, is Finland, with 65% of respondents saying they trust their news a majority of the time, which is a 9% increase from the previous year.