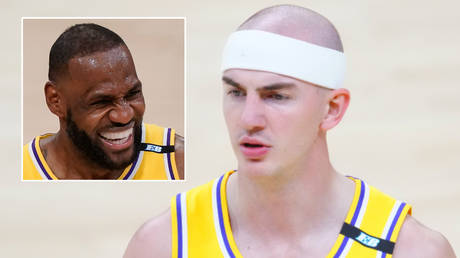 LeBron James has joked about paying “straight cash” after reports that Alex Caruso, one of his Los Angeles Lakers team-mates who he has built a close on-court relationship with, has been arrested for possession of marijuana.

A police spokesman is said to have confirmed that Caruso, whose $5.5 million deal at the Lakers ends next month, was found with a grinder containing marijuana residue at an airport in Texas.

Officials said the 27-year-old was arrested for possession of less than two ounces and released on bonds totaling $4,200, according to KBTX.

When musician Josiah Johnson produced a clip joking that James would promise to rescue Caruso, the NBA legend surprisingly responded with a meme based on notorious NFL bad boy Randy Moss.

Alex Caruso has been arrested in Texas for possession of marijuana

The immortal footage shows Moss’s reaction to being fined $10,000 for pulling his trousers down in an end zone, when he told reporters the day after that he would pay the fine in “straight cash, homie”.

Texas is not one of the 15 US states where marijuana possession has been legalized, putting Caruso on a collision path with the law after a fine season with the Lakers.

A relative newcomer to the elite game after turning professional in 2016, the guard was just one of the majority of the team’s players who underperformed in the six-game defeat to the Phoenix Suns in the first round of the 2021 NBA Playoffs.

LeBron, why are you condoning marijuana usage? I’ve personally lost over 100 loved ones do to marijuana overdoses. The marijuana is a lethal and addictive drug. With your platform you need to set a good example.

Caruso has won a high-profile admirer in Lakers talisman James along the way.

“We’re one and the same when it comes to winning basketball,” James told the Wall Street Journal.

“To see our chemistry together… I think it comes with our minds.”

Looney Tunes ahead of Team USA? LeBron says he’s focusing on new ‘Space Jam’ movie instead of Olympics this summer

‘Mcgregor has to get a killshot’: Legendary GSP coach Zahabi speaks on UFC 264 headliner versus Poirier (VIDEO)

French far-left leader has flour thrown in his face during…

I live in the moment: Soha