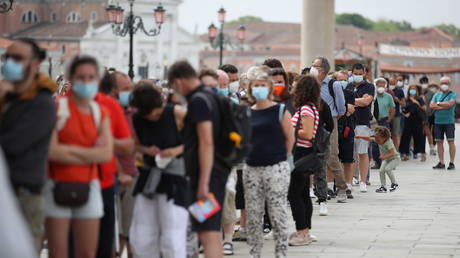 The European Centre for Disease Prevention and Control (ECDC) has warned that EU states risk a “fast and significant increase” in the spread of the Delta Covid variant if they proceed with relaxing restrictions during the summer.

In a threat assessment report released by the EU agency on Wednesday, the ECDC warned that the Delta variant could account for 90% of Covid infections throughout the bloc by the end of August due to its higher transmissibility than other strains.

With member states across the bloc relaxing Covid restrictions as their vaccination programs proceed and the summer season unfolds, the ECDC has warned that countries could see “a fast and significant increase in daily cases in all age groups.”

The EU agency’s report noted that the Delta variant could pose a greater threat than other coronavirus strains as it may be linked to higher hospitalisations, with the knock-on risk of fatalities.

Scientists working at the ECDC also highlighted concerns about the risk posed by the Delta variant to people who have only received one dose of a Covid vaccine. The assessment lays out evidence that this cohort is less well protected against the Delta strain than other variants, compared with those who have been fully inoculated.

Given this, officials at the agency fear that relaxing restrictions could see the strain “circulate extensively during the summer,” fuelled by “younger individuals that are not targeted for vaccination” socialising.

The remarks from the ECDC echo fears raised by the World Health Organization (WHO), which has previously described the Delta variant as “of concern,” with it having spread to more than 60 countries around the world since it was first detected in India in October 2020.