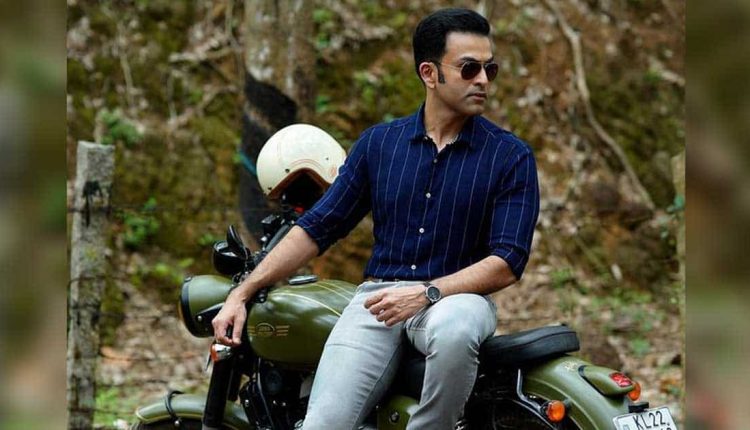 Malayalam star Prithviraj Sukumaran acknowledges the industry has been missing “happy films”, and the reason is the contained environment under which everyone has been living over the last one and a half year.

“I think the primary reason for that is all the filmmakers, actors and producers — all of us — were forced to start thinking about contained films. Films that could pull off under these circumstances,” shares the actor, as he opens up in a conversation with IANS.

“More often than not, when you start thinking on these lines, the genre that you start deviating towards is either a thriller, a dark satire happening in real space, like ‘Joji’. As is the usual practice when you start thinking about happy films — films that have a lot of actors, laughter, joy, comedy and music — you start thinking that this is big and the film has many locations, people, and places. So, you don’t usually think on those lines, when you think what kind of a film you can pull off under the given circumstances (of the pandemic and lockdown),” Prithviraj Sukumaran says.

Prithviraj Sukumaran made his directorial debut in 2019 with the film “Lucifer”, and is now all set to wield the megaphone again in the recently announced “Bro Daddy”. Besides him, the film will also be headlined by superstar Mohanlal. Prithviraj calls it a happy film that has badly been missing in Malayalam cinema lately.

“I was supposed to come with my next directorial long back, which was supposed to be a sequel to ‘Lucifer’. It was a much bigger film. If things would have been as we wished, then it would have been shot this year, but due to obvious reasons we couldn’t start. To me, it seems we are badly missing a happy film in Malayalam cinema over the past one and half year. All of the content we see in Kerala is dark. It’s either a murder mystery or a dark satire or an investigative thriller,” Prithviraj Sukumaran says.

“I thought we were all badly missing a happy film, which is when these two writers came and narrated the script to me. I found it to be interesting, hilarious and more than anything I found it to be a really enjoyable, light watch. I casually narrated the idea to Mr Mohanlal over a zoom call and he said that we are doing this and the project took off,” recalls the actor-filmmaker.

Prithviraj Sukumaran made his Bollywood debut with 2012 film “Aiyaa” alongside Rani Mukerji, and was later seen in films such as “Aurangzeb” (2013) and “Naam Shabana” (2017). However, his presence in Bollywood has been rare ever since.

“I have heard a few scripts in between but the fact of the matter is that Malayalam cinema is going through such a high and all of us find such great content here in Malayalam, it would require something really good to come and invest that kind of a time in a Hindi film, though I look forward to it. I hope something good enough finds its way to me,” he says.

Right now, Prithviraj Sukumaran is gearing up for his next film, the dark mystery thriller “The Cold Case”. He shares that shooting for the Malayalam film was a new experience for him.

“This is going to be one or the first films I shot with post-pandemic regulations. We were not used to social distancing on the set, being masked all the time. This film was shot strictly keeping all precautions in mind. Most of us would remember shooting ‘The Cold Case’ because all of us were coming together for the first time post the pandemic,” he says of shooting the film, which will soon stream on Amazon Prime Video.

The post Prithviraj Sukumaran On Malayalam Cinema: “We Are Badly Missing A Happy Film” appeared first on Koimoi.

Watch: Massive tornado touches down near Mascouche suburb of Montreal in Canada, kills one

Ronaldo to open three football schools in China by December