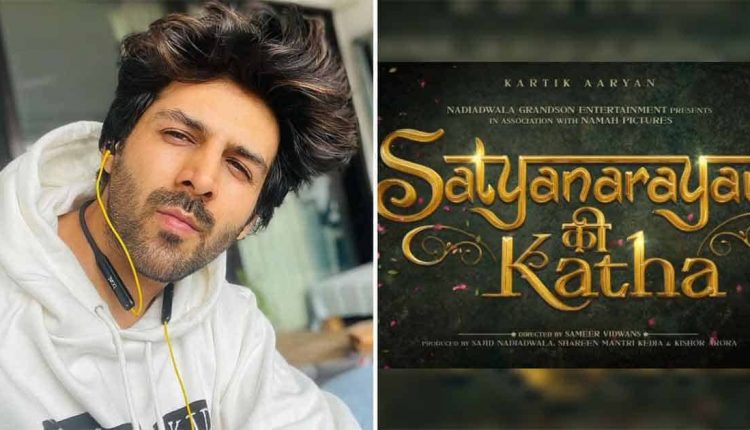 Producer Sajid Nadiadwala in collaboration with Namah Pictures announced their upcoming film, a soulful musical love saga, titled ‘Satyanarayan Ki Katha’ with Kartik Aaryan in the lead. Co-produced by Namah Pictures and Sajid’s banner Nadiadwala Grandson Entertainment, the film will mark the first collaboration between Kartik Aaryan and Sajid Nadiadwala while it will be directed by National award-winning director Sameer Vidwans.

Sajid Nadiadwala shares, “Satyanarayan Ki Katha’ has been a visionary project for me. We, at Nadiadwala Grandson Entertainment are excited to collaborate with Namah Pictures, national award-winning Director Sameer Vidwans and very talented Kartik for this one. This will be our first time working with Kartik and he brings new energy to the project, all together. Satyanarayan Ki Katha makes for a script that calls for this perfect union and we are looking forward to bringing this ultimate love story to the audience”.

Satyanarayan Ki Katha is an epic love story that will bring Kartik Aaryan in the lead after Pyaar Ka Punchnama franchise, Sonu Ke Titu Ki Sweety, and Pati Patni Aur Woh. While Kartik’s previous ventures too were in the romantic space, we will see the actor bring a narrative that has not been explored before with this one. The film promises to be an unforgettable love story.

Shabaash Mithu Gets A New Director In Srijit Mukherji As Rahul Dholakia Exits!
Shilpa Shetty Kundra Drives Home With Her Point About ‘Positive Mindset’ With A Yoga Pose

Kartik Aaryan shares, “I have been wanting to work with Sajid sir for sometime now, I couldn’t have asked for better collaboration. I’m extremely happy that I am a part of Sajid Sir, Shareen and Kishor’s vision. Satyanarayan Ki Katha is a musical love saga which brings together a powerhouse of people who are National award-winning names. It’s also a first for me with Sameer Vidwans sir who has an astute sense of making sensitive topics highly entertaining.”

“Honestly, I feel immense pressure and responsibility, since I am the only member in this team without a National award,” adds Kartik in his signature cheeky style.

Namah pictures’ Shareen Mantri Kedia says, “SNKK is a unique love story that makes you want to believe in the power of love. The story embellished with Kartik’s innocent charm will win everyone’s hearts.”

Kishor Arora adds, “We at Namah are happy to collaborate with a creative force like Sajid Nadiadwala in bringing this heartwarming tale to the audiences. Sameer Vidwans, who is known for deft handling of emotions is an apt choice to capture the myriad of emotions etched on paper by Karan Sharma.” Kartik Aaryan starrer Satyanarayan Ki Katha is all set to go on floors towards the end of this year.

The post Kartik Aaryan Finally Has A Good News! Teams Up With Sajid Nadiadwala For ‘Satyanarayan Ki Katha’ appeared first on Koimoi.

Bilkis case: Gujarat gets 2 weeks to act against cops