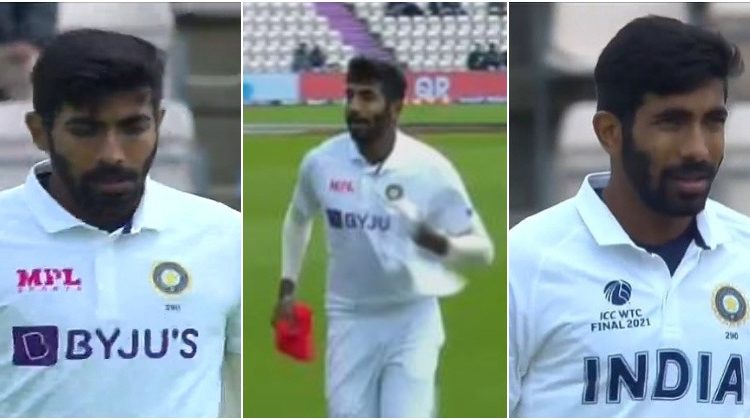 India’s premier fast bowler Jasprit Bumrah has failed to live up to the expectations during the World Test Championship final against New Zealand. Bumrah was the only Indian bowler who failed to pick a single wicket which put extra pressure on other quicks Mohammed Shami and Ishant Sharma.

Despite his poor outing on the third day, skipper Virat Kohli entrusted him to bowl the first over on Day 5 of the summit clash. But more than his bowling, what caught everybody’s attention was the jersey he was wearing.

With the WTC final being the biggest Test match in the history of the format, a special jersey was designed for players from both teams, which had some unique characteristics and noticeable changes on the design part.

Bumrah’s mistakes didn’t go unnoticed and soon he had to face heavy trolling on social media, with many people saying that he should wear the Mumbai Indians jersey inside the Test jersey in order to regain confidence and perform better.

From a rookie few years back, Bumrah has emerged as one of the spearheads of India’s bowling attacks and is probably the first name on the team sheet across formats.

“So basically, what I try to do is, I channelise my anger. When I started as a youngster, I used to get angry left, right and center and I used to do all types of gimmicks which didn’t really help my game a lot,” Bumrah said in the video released by the ICC.

“I realised what works for me. I am smiling, but the fire inside is burning all the time.”

“Over the years I played a lot of international cricket, realised what works for me. So, I am smiling but the fire inside is burning all the time. I don’t try to show it all the time but this is the way that helps me to succeed and with that controlled aggression, I try to take my game forward,” he added.

Fans expect him to deliver all the time but that is not humanly possible and every professional athlete goes through ups and downs several times in his career, hence passing judgements after just one bad game is a bit too much.

There is no doubt he will bounce back strongly and silence his critics, proving once again that ‘form is temporary but class is permanent’ and that there is no one like him in the business.