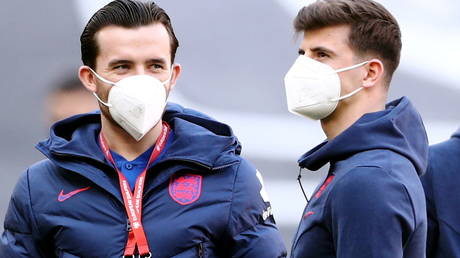 England duo Mason Mount and Ben Chilwell have been ordered into self-isolation after contact with Billy Gilmour at the recent England-Scotland Euro 2020 game – but fans are asking why Gilmour’s Scottish teammates are off the hook.

Chelsea pair Mount and Chilwell must observe a period of isolation after it was determined that they had come into close contact with Blues teammate Gilmour, who gave a star-making performance during Scotland’s 0-0 draw at Wembley in the Group D encounter.

It was confirmed early on Monday that Gilmour, 20, had tested positive for Covid-19 and now must undergo 10 days of isolation at Scotland’s training base in the north-east of England, missing his country’s crunch encounter with Croatia on Tuesday.

Despite the entire England squad returning negative tests on Monday, the decision was made in the Three Lions camp to keep both Mount and Chilwell away from the rest of the squad, presumably pending the findings of further tests. Their participation in England’s final group game against the Czech Republic remains in doubt as a result.

“As a precaution at this time and in consultation with Public Health England [PHE], Ben Chilwell and Mason Mount are isolating after interaction with Scotland player Billy Gilmour at Friday’s match,” read a statement from The FA.

“The pair will be kept away from the rest of the England players and wider support team, pending further discussions with PHE. The entire squad had lateral flow tests on Monday afternoon and all were again negative, as was the case with Sunday’s UEFA pre-match PCR tests.

“We will continue to follow all Covid-19 protocols and the UEFA testing regime, while remaining in close contact with PHE.“

Laughable given the Scotland squad are with Gilmour 24/7 and they can all carry on. #FreeMount

Croatia manager Dalic not happy at inconsistencies in Covid rules meaning only Gilmour out for Scotland.

England’s cautious approach to Covid safety appears – on the surface, at least – more stringent than the reaction of the Scottish camp, given that Gilmour would likely have had contacts with several of his teammates on and off the pitch before he returned his positive test.

Subsequently, Croatia coach Zlatko Dalic told the media on Monday that several members of his squad have spoken of their concerns about interacting with the Scotland team so soon after the news of Gilmour’s test results were released.

His team pulled out of plans to hold their tournament training camp in Scotland after being told that rules dictated that if one of their players tested positive, they must all self-isolate.

“Today all of my players are afraid and I hope none of them decides not to play because one of the opponents is positive,” Dalic said.

“We will have a meeting about the situation but I don’t expect any of them to request this. But we were afraid that something like this would happen and we would all end up in isolation with these serious issues.

“I know how much pressure we had when it came to that training camp in Scotland because they told us that if one of us tested positive for the virus we would all have to go into quarantine.

“So instead we have stayed in Croatia and we’re travelling to the UK every three days and taking tests with all the added psychological stress and uncertainty.

“We are also very much harmed because we are playing without our fans. With our supporters we are much stronger so this is not really fair.

“We have to travel, we have to keep in isolation all the time, we cannot have Croatian fans. These are not good conditions. They should be the same for everyone, but they’re not.

“So I hope this is just a single case which doesn’t go any further. Of course we are concerned but unfortunately we have to play this match.“

‘You would never say this to a man’: Golf babe Spiranac rows over DeChambeau as Rahm returns from Covid heartbreak to win US Open

Saturated Shades Are Trending for Fall, and This One Is…