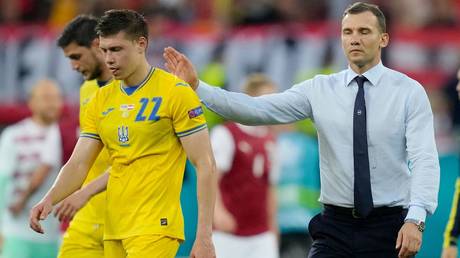 A Christoph Baumgartner goal was enough for Austria to claim three points against Andriy Shevchenko’s listless Ukraine side, who now must sweat it out to see if they will qualify for the next stage as one of the best runners-up.

Baumgartner’s first-half strike was the highlight of a largely turgid affair at the National Arena in Bucharest, which was marked by occasional moments of Austrian innovation contrasted by a Ukrainian side who looked short on ideas for much of the 90 minutes.

Hoffenheim attacking midfielder Baumgartner poked home a 20th minute corner from Real Madrid’s newest Galactico, David Alaba, to hand Austria what turned out to be an unassailable lead – but in truth, Franco Foda’s side will consider themselves unlucky that they weren’t able to convert their dominance into further goals.

39 – For the first time for 39 years (World Cup 1982) the Austrian team have made it out of the initial Group Stages of a major tournament. Continue. #AUT #UKRAUT #EURO2020 pic.twitter.com/ty6lYw7JF0

The game displayed something of a reversal in fortunes for both sides. Austria, abject in their loss to the Netherlands, looked impressive. Ukraine, who in turn handed the Netherlands a stern test in what ultimately was a 3-2 loss, didn’t look capable of escaping second gear.

The manner of the win was even more remarkable given that star man Marko Arnautovic, who was making his return to the Austria starting XI after being suspended by UEFA for one match for supposedly “insulting” North Macedonian players, looked off the pace for much of the game, spurning two gilt-edged chances along the way.

I never would have thought that Shevchenko would be outsmarted by Franco Foda, but there is always the element of surprise in international football.

Getting the best from Ukraine’s golden generation?

As impressive as the Austrian performance was, questions will surely now be asked of Ukraine coach Shevchenko. The former AC Milan star has openly pined about one day managing in Serie A but his side’s grim surrender in the Romanian heat won’t exactly have many Italian clubs reaching for the rolodex.

The three points confirm Austria’s second-place finish, three points behind pacesetters the Netherlands, and drafts them into a knockout game this weekend with Roberto Mancini’s finely-tuned Italian team.

Shevchenko and Ukraine, meanwhile, finish the group stage with three points and a goal difference of -1 and must now keep a watchful eye on various other resorts if they are to somehow contort themselves into the unlikeliest of routes into the round of 16.

“Team Ukraine and Shevchenko are a huge disappointment,” came the response from one fan, while another laid the blame for the loss squarely at the feet of the Ukraine coach.

“I never would have thought that Shevchenko would be outsmarted by Franco Foda, but there is always the element of surprise in international football,” they said.

Dutch trio of Cillessen, Klaassen, Sneijder out against…